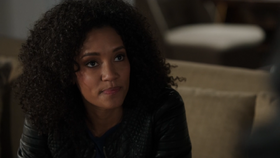 Harper Rose is an alias of a drifter and a con artist who is later recruited by The Machine, which employs the alias of Ernest Thornhill.

Harper Rose first appeared as a person of interest when she was planning to cross both The Cartel and The Brotherhood.

Harper started working at the same medical marijuana dispensary as her boyfriend Trey Wender, with the intent of stealing its drug money. However, she didn't know the dispensary was under The Brotherhood's protection.

Reese later discovered Harper was connected to dozens of other cases and finds many personal documents with stolen identities.

She was later attacked by the brotherhood, but Reese and Fusco arrest her to protect her. After Reese's plan to get the Brotherhood of her back by giving them the stolen money fails, Harper double-crosses the Parral Cartel, one of their enemies. The cartel's members were arrested. Dominic is left impressed and offers her a chance to work with him. (“Blunt”)

She provided Ray Pratt, a small-time criminal, with a new identity to escape a relentless bounty hunter. Ray betrayed Harper and tried to kill, but Reese saves her life again and she later tells him Ernest Thornhill has been contacting her via encrypted texts and wants her to work for him. (“Skip”)

The Machine under the alias of Thornhill sends Harper to infiltrate The Brotherhood hideout where Reese along with Fusco and Elias are being held captive. (“Asylum”)

Harper betrays Dominic and helps Fusco escape but gets herself caught in the process. As Dominic plans to execute them all, Reese with help from the Machine, breaks free and takes out all of the Brotherhood soldiers while Dominic is arrested by Fusco and the NYPD.

While Harper continues to receive texts from Ernest Thornhill, she is still unaware of its true nature. (“YHWH”)

After Reese, Fusco and Shaw stop a Presidential assassination, Harper appears in the terrorists hideout under the alias of Agent Wickham of Homeland Security and claims to the Secret Service agent in charge she was working an operation with Fusco to take down the terrorists. Harper is able to successfully bluff her and Fusco's way out, expressing surprise that her deception actually worked. Fusco is shocked to see Harper who simply tells him that she is there to save his life again. Harper leads Fusco to a meeting with Reese, Joey Durban and Logan Pierce. Pierce explains to Reese and Fusco that he, Joey and Harper now work as a team chasing numbers, similar to Finch's team. While Reese, Fusco and Shaw had the relevant number of the President of the United States, Pierce's team had the irrelevant number of them and had been aiding them from the background. After musing on how many other teams might exist, Joey, Pierce and Harper depart to go after a new number they've been given. (“Synecdoche”)

Retrieved from "https://personofinterest.fandom.com/wiki/Harper_Rose?oldid=79875"
Community content is available under CC-BY-SA unless otherwise noted.