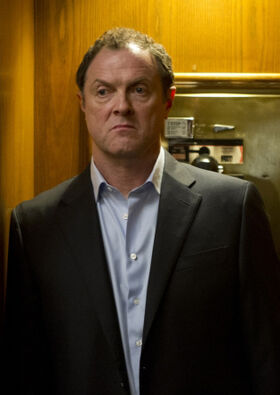 Hersh, also known by the alias Robert N. Hersh, is a government operative who works with "the Program". His character is introduced when he is ordered to remove evidence of Alicia Corwin's murder from the 8th Precinct. He is unquestioningly loyal to the Project, undertaking a range of tasks as needed to protect it or forward its aims, usually on the orders of Special Counsel and later, Control.

Little is known about Hersh's background, except that he is a capable interrogator. He is or has been responsible for training government operatives, among them Sameen Shaw. As part of his work, he eventually becomes aware of the existence of the Machine, which he calls Research when following Root across the country to where she believed it was kept.

When Hersh and Special Counsel become aware of Nathan Ingram's plans to make the nature of the Machine public, they realize they have the weapon they need in Asif. Hersh takes a drugged Asif to the ferry terminal and leaves him strapped to the wheel as an apparent suicide bomber. Ingram is killed, and Finch injured in the subsequent bombing, leading Finch to fake his death in order to protect his fiancée Grace. (“God Mode”) (“Beta”) Ingram's funeral was not seen but was referred to by Alicia Corwin and Will Ingram. (“Wolf and Cub”)

The investigation of Alicia Corwin's murder is assigned to the NYPD 8th Precinct. Special Counsel quickly dispatches Hersh to clean up any evidence of their activity. Hersh steals Corwin's case file and corrupts any digital records along with the ballistics report. As a result, her murder remains an unsolved case. (“The Contingency”)

Special Counsel also informs Hersh about an unknown operative who thwarted the assassination of Henry Peck (“No Good Deed”) after he contacted Alicia Corwin. Hersh intends to find and kill this operative.

When Denton Weeks disappears on private business, Special Counsel sends Hersh to track him down. He arrives at a house belonging to Weeks' mistress and finds Weeks' dead body. Root, who shot Weeks, left before Hersh arrived. Unknown to Hersh, he is followed by a suspicious Fusco who uses Finch's forced pairing program to listen in on Hersh's calls. The information Fusco gleans from the calls provide him with a clue as to where Root took Harold Finch. (“Bad Code”)

To clean up any remaining loose ends, Hersh goes to Alicia's hotel room to collect her personal effects. Later, he gains access to Corwin's body at the morgue, removing an RFID chip implanted in her arm. (“Masquerade”)

When Special Counsel learns that the FBI arrested four men suspected of being "the man in the suit," he informs Hersh that the four suspects are imprisoned at Rikers Island. Hersh arranges his own arrest and plans to kill all four men to ensure that Reese is eliminated. Taken to Rikers Island, he manages to kill Brian Kelly, one of the four. However, his attempt to kill Reese is foiled by Carl Elias. (“Prisoner's Dilemma”)

Hersh is soon freed from Rikers Island and tracks Reese to the Coronet Hotel, where he captures him at gunpoint. Hersh and Reese engage in brutal hand-to-hand combat with Reese defeating Hersh by inflicting a near-fatal wound. (“Booked Solid”).

While recovering from his wound in the hospital, Hersh is summoned to Washington, D.C., where Special Counsel briefs him on Sameen Shaw, one of Hersh's former trainees, now an agent from the Project. Hersh returns to New York where he poisons Shaw. Unknown to Hersh and Special Counsel, Shaw survives due to the efforts of Reese and Finch. (“Relevance”)

Special Counsel's kidnapping by Root (“Zero Day”) soon sends Hersh in pursuit of Root. His team kills the long-hidden Lawrence Szilard, the only survivor of the group who developed the permanent location of Machine when Root leads them to him. Later he, his men and Special Counsel arrive at the place where the Machine is stored, only to learn that the Machine moved itself to a new location. On orders from a mysterious woman, Hersh kills the remaining Project staff, including Special Counsel. Later, Hersh meets the woman and tells her that Research (the Machine) has made contact, and is directed to get a team together, indicating Hersh now works for her. (“God Mode”)

Hersh is tasked with searching area mental institutions in an effort to locate Root. He finally succeeds in locating her and the Machine assists Root in shooting Hersh but then prevents her from killing him. Finch shows up and finds that Root is gone, and Hersh is incapacitated, lying on the floor. (“Lady Killer”)

Hersh later appears with his men and holds Finch, Shaw and Arthur Claypool at gunpoint. Arthur's wife Diane is revealed to be Control when Hersh addresses her as "Ma'am", and she declares that whoever gives her the location of their Machine - Arthur or Finch - stays alive. (“Lethe”)

After Root saves Arthur, Finch, and Shaw, Hersh shoots Root in the arm to stop her from escaping. As members of Vigilance raid, the bank where the drives of Arthur's machine Samaritan are being kept, Hersh and other agents follow them there, posing as a SWAT team. Upon entry, they kill multiple members of Vigilance. Hersh follows another member, and just as his agents have the man surrounded, he sets off a grenade. (“Aletheia”)

Hersh survives the blast and is seen again sitting in a cafe surveilling a new relevant number when Shaw, having spiked his coffee with a drug, approaches him to question him about another number. Hersh is revealed to have placed ISA agents on the flight on which the number is traveling. (“4C”)

After Vigilance causes a city-wide power outage and kidnaps Control and Manuel Rivera from a hotel room, Hersh arrives in the hallway, only to find Shaw and Reese pointing their guns at him. After a tense standoff, Reese proposes that they work together to rescue both Finch and Control. Reese lowers his firearm, signaling his peaceful intentions. Hersh does the same, followed by Shaw. They proceed to a Decima facility in search of Finch, but they find an empty room with a television screen linked to a live broadcast of Peter Collier hosting a kangaroo court. (“A House Divided”)

After watching the broadcast for a brief moment, three Decima operatives burst into the room, and Reese, Shaw, and Hersh fire at them. After taking a picture of the courtroom on the television screen, they walk the streets asking local people to identify the building. No one recognizes it. Meanwhile, Root contacts Shaw and reveals that she is about to enter a Decima computer facility to install her modified servers. Realizing that Root is in grave danger with no backup, Shaw decides to join her. She needs immediate transportation. Hersh shoots in the air to scare a bike rider and gives the bike to Shaw. Then Reese and Hersh proceed to a rendezvous with Bear and Fusco, where Fusco tells them about a group of people looting on 5th avenue. Hersh suspects it is a diversion tactic from Vigilance. Reese and Hersh disguise themselves as Vigilance members and track down a real Vigilance member on the street. They trick the man into revealing the location of the courthouse and then allow Fusco to arrest him.

Heading for the courthouse, they happen upon a Vigilance guard post, but all the guards are dead. Reese and Hersh split up inside the courthouse. In the basement, Hersh finds a large bomb that is rigged to explode as soon as power is restored. He begins defusing it, but a Decima operative finds him and shoots him in the back. Hersh continues to fight valiantly, incapacitating multiple Decima operatives in spite of additional gunshot wounds. In a final effort, he slumps onto the bomb, reaching to cut the last cord required to defuse it, however, the power is restored and Hersh dies in the blast.

Español
Community content is available under CC-BY-SA unless otherwise noted.