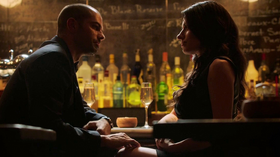 "Honor Among Thieves" is the seventh episode of season 4 and the 75th produced hour of Person of Interest. It originally aired on November 11, 2014.

Shaw joins a team of international thieves in order to keep tabs on the latest POI, but an unexpected turn of events puts her in danger of being detected by Samaritan. Also, Finch and Root undertake a dangerous sabotage mission.

The title derives from the old adage that there is "no honor among thieves." The meaning becomes clear when the team with whom Tomas has worked for six years suddenly turns on him because, in Katya's words, "Business is business."