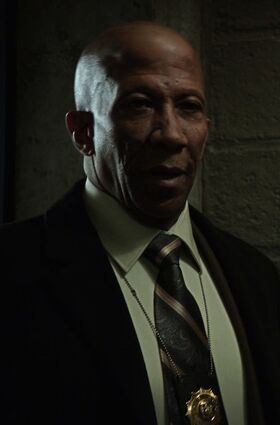 Ian J. Davidson was a corrupt detective for the Internal Affairs Bureau and a member of HR. He was passing vital information to Neil Vargas.

He takes Fusco away when he discovers him breaking into an IAB vault to destroy evidence of Michael Cahill's undercover assignment and then knocks him out when Fusco finds out that Davidson is Vargas' inside man.

Davidson takes Fusco out into the forest and tells him that he’s always been dirty and always will be. He asks the name of Fusco's employer but he refuses to give them up. Davidson prepares to shoot him but Reese arrives just in time to kill the IAB officer. Reese tells Fusco to go to HR to cover up the murder as Reese needs someone on the inside to bring HR down. Fusco asks HR Officer Simmons to help dispose of Davidson's body, to which Simmons agrees, but says that Fusco is now part of HR. (“Blue Code”)

After Fusco refuses to take part in the meeting with Scarface, Simmons sends him a video of Fusco and Davidson together and a message stating "most accidents don't require a shovel." Realizing that Simmons is blackmailing him, Fusco reluctantly takes part in the meeting. After Luciano Grifoni sends the message through him to HR that Elias says to "go to hell", Fusco cuts ties with HR causing Simmons to send an anonymous tip to Carter that Davidson, who has been missing for six months, was murdered by a cop. (“C.O.D.”)

After getting Simmons tip, Carter begins looking into Davidson's disappearance, asking fellow detective Cal Beecher if he knew Davidson. Beecher tells Carter that he had some run-ins with Davidson and Carter explains how she got an anonymous tip that a cop had killed Davidson. Beecher suggests that an HR cop killed Davidson and mentions a group of HR cops who had been working out of the Fifty-First Precinct and had been killing drug dealers and selling their supply. Carter asks for names, but they are interrupted by Agent Donnelly. Fusco later confronts Simmons about pointing towards him for Davidson's death and tells Simmons that he crossed the line where Fusco doesn't care anymore as a result. While Fusco suspects Simmons of pointing Beecher towards him about Davidson, Simmons tells him he hasn't talked to Beecher or anyone else about Davidson's body yet. (“Shadow Box”)

Fusco later finds Carter continuing to investigate Davidson's disappearance. Carter tells him she thinks a lot of cops have reason to want an IAB detective dead and remembered the disappearance of James Stills. Carter grows suspicious that something is not right since two detectives have disappeared with their bodies never turning up. Carter later continues her work in an interrogation room, continuing to be suspicious about Davidson and Stills disappearing and refuses to listen to Fusco tell her about his dirty past after he sees her continuing investigation. (“One Percent”)

Retrieved from "https://personofinterest.fandom.com/wiki/Ian_Davidson?oldid=81246"
Community content is available under CC-BY-SA unless otherwise noted.