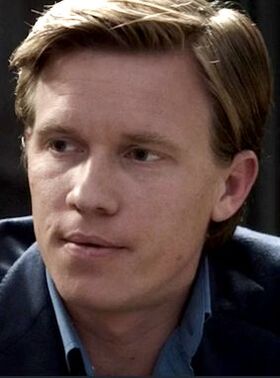 Ian D. Murphy is an investor and playboy who becomes a person of interest in “Lady Killer”.

Ian grew up in a low income area of South Boston. His parents died when he was a teenager, and he became an emancipated minor at 17. An uncle he never knew left him $100,000 in his will. Finch was able to discover that the money actually came from a shell corporation funded by Bruce Wellington.

Murphy is a successful investor in a variety of businesses including a coffee house, a nightclub and a microbrewery. He is a gourmet cook. He uses a variety of online dating sites in order to meet women. He investigates the women he meets in order to get to know their likes and dislikes.

Murphy fell in love with Wellington's daughter Dana when they were in college together and she became pregnant. Wellington did not approve of Ian so he told him that Dana had an abortion and Ian lost contact with her. Dana did in fact give birth to a boy named Alex and Wellington raised him to be the heir to his empire. When Ian attended Dana's funeral, Wellington feared he would find out about Alex so he arranged to have Murphy killed.

Reese and Finch receive Murphy's number from the Machine, and his background and evidence from his apartment suggested that he is a stalker. They follow him in the park and watch him change his appearance and go date a different woman than he was with earlier. Later, in Murphy's apartment, Reese finds pictures of various women, who Finch links to an online dating site that Murphy uses. The women were all members of the site, and had a habit of going to a specific nightclub on a scheduled basis. Murphy visits there frequently as well. Reese also finds two printed documents containing reports about the deaths of two of the women Murphy dated before, leading Reese and Finch to believe that he kills the women that he stalks.

Reese suggests that they get the help of Shaw, Carter, and Zoe Morgan to help lure him into the open. Finch creates profiles on the dating site for all three women, and has them go to the nightclub. While waiting for Ian, the three party and enjoy drinks while Fusco watches from a balcony for Ian. Murphy arrives, and tries hitting on Carter. On Finch's request to learn more about Murphy, Carter accepts Ian's offer to go to his house.

Everything goes fine at Ian's house, and Carter is ready to leave. Two of Wellington's men arrive and prepare to kill Ian, but Shaw and Carter each shoot one of them. Ian is taken to a safehouse, where he tells Reese, Finch, Carter, and Shaw that he doesn't stalk the women, but rather researches them, as he claims the women appreciate his knowledge of their likings, and that his relationships aren't meant to last. He also reveals to the group the information on Dana's pregnancy, and that she had an abortion.

Finch later finds out that Murphy's son Alex was in fact born and raised by Wellington. Murphy is shocked to learn this information, and he and Finch watch Alex get ready to go to a boarding school outside the U.S. A payphone rings for a new number, surprising and distracting Finch while Murphy knocked out Alex's car's driver and got in posing as one. He takes Alex to the park, where he tells him he knew Dana. Carter then shows up and gives Alex money to go buy an ice cream, and Ian comes with her to the police station.

Carter is able to locate Alex's birth certificate and Ian was going to get custody of Alex. Ian thanks her and kisses her goodbye before leaving.