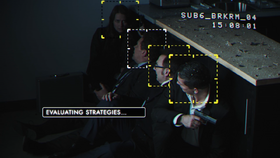 "If-Then-Else" is the 11th episode of season 4 and the 79th produced hour of Person of Interest. It originally aired on January 6, 2015.

Samaritan launches a cyber-attack on the stock exchange, leaving the team with no choice but to embark on a possible suicide mission in a desperate attempt to stop a global economic catastrophe.

In computer programming, the keywords if, then, and optionally else make up the most common form of conditional expression. In an if-then(-else) clause, a certain block of code (the then clause, though not all languages use that keyword) is executed if (and only if) a certain condition is met. The structure may also have an else block present which it will execute if the condition fails. The else clause may include its own conditional, which is often simplified as else if. The phrase is a metaphor for the consequences of choices: what happens if we turn right rather than turn left, or separate rather than stay together, choices the Machine must explore.

Multiple flashbacks, in which Finch teaches the Machine to play chess and work on different possible strategies, are shown. The machine starts with a weak opening move, f3 Barnes Opening which can lead to Fool's Mate if played. In the second flashback The Machine plays Queen's Sacrifice which is a risky move. In the final flashback The Machine wins and selects the proper strategy.

When Samaritan springs its trap, the team finds itself pinned down in the Stock Exchange break room, where it must either stand and fight, or find a means of escape. Fusco exhorts Reese to "Remember the Alamo!", which suggests he sees their situation as hopeless: their last stand. A last stand is characterized by military troops who must take a defensive position against overwhelming odds, generally fighting to the last man. History has documented numerous last stands, from the Battle of Thermopylae (480 BC) to Custer's Last Stand at the Battle of the Little Bighorn (1876), which are less remembered for who won, than for who fought well, and died.

What Happened to Shaw?

We're not sure, and may not be for some time. The last sound we heard was the door of the elevator closing, or possibly a gunshot (we can't be sure which), and Shaw's status is unknown. Why? Sarah Shahi found out she was pregnant just as the season began filming, and soon after, learned she was expecting twins. Her doctor recommended she stop working by her sixth month, which she has now done. She has left the show for the time being, with the option to return. However, she recognizes the demands that twins will place on her, and is unsure when they will allow her to return to work at the level of commitment she needs to play Shaw for some time, if at all. The producers have written her out with the door open, so she can return in time, should she want to. Read more here, and see what the cast and producers had to say here.

Oh, and about that kiss... what can we assume? Not much. See what the producers and Shahi have to say here. They can't even agree what it might mean. Time will tell.

In the third simulation, the Machine accelerates the action, at which time we hear the characters describe their dialogue rather than actually delivering it:

This sequence demonstrates how well the Machine has come to know each of these characters, who it is able to describe in terms of their response style.