View source
watch 01:25
Jurassic World: Dominion Dominates Fandom Wikis - The Loop
Do you like this video?
Play Sound
In Extremis 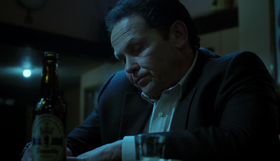 When a luminary in the world of medicine is poisoned, Reese and Finch have just 24 hours to determine the deadly toxin he was given and find the person behind the attack. Meanwhile, Detective Fusco's past corruption catches up with him when an informant gives the Internal Affairs Bureau the crucial information they need to send him to prison.

In extremis is a Latin phrase, which refers to extreme conditions or at the point of death.

In a 2004 flashback, it is shown how Stills gets Fusco involved in HR.

Plato was Greek a fourth century BC philosopher and mathematician. Along with Socrates and Aristotle, he laid the foundations of western philosophy and scientific thought. The episode juxtaposes two of his quotes, one literally and one ironically:

The episode uses juxtaposition, the act of placing or positioning abstract elements side-by-side or back-to-back to illustrate a contrast or contradiction, by transitioning from the scene showing, the respected but flawed, Dr. Nelson being honored to the scene of Cal Beecher's funeral. To create a sense of irony, the two characters recited quotations from the Greek philosopher Plato, which define their characters while bridging the two scenes, setting up the contrast between the good, but dying doctor and the bad but living Alonzo Quinn, who set in motion the chain of events that led to the demise of his godson. Drama frequently uses these two elements to underlie the emotional content of stories.