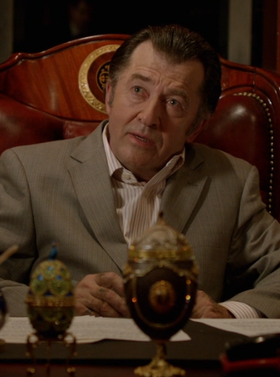 Ivan Yogorov was the boss of the Russian Mafia based in Brighton Beach and the father of Peter and Laszlo Yogorov, who worked for him as enforcers.

His brother and half a dozen Russian mobsters were killed on the orders of Carl Elias in the latter's mission to take over Brighton Beach. Ivan personally executed Elias's lieutenant Bennie D'Agostino who had assassinated his brother. (“Witness”)

Ivan himself was shot and killed in his office by Anthony Marconi after he refused Elias' demand that he leave town. Ivan's death ended the Russians' dominance of Brighton Beach and greatly reduced their power forcing them to join forces with HR.

Peter assumed control of the Yogorov Crime Family while Laszlo was kept in jail by HR as leverage to keep the Russians in line.

Retrieved from "https://personofinterest.fandom.com/wiki/Ivan_Yogorov?oldid=71324"
Community content is available under CC-BY-SA unless otherwise noted.