Person of Interest Wiki
Register
Don't have an account?
Sign In
Advertisement
in: Persons of Interest, Male Characters, Characters
English 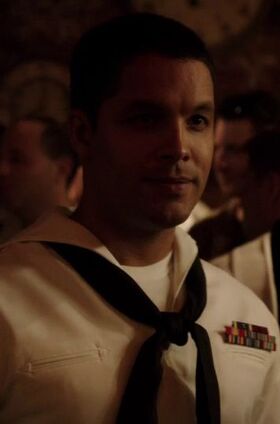 Jack Salazar is a non-commissioned officer with the US Navy who became a Person of Interest after his friend RJ stole some uncut diamonds that were part of a larger shipment being transported aboard his ship without his knowledge.

Salazar is a USN petty officer second class who enlisted in the Navy in order to avoid jail as the result of a violent bar fight he participated in when he was 20 years old. He was charged with Assault in the Second Degree (FL-784.011) a misdemeanor. A life in the military proved to be a good choice. He was designated the "Enlisted Sailor of the Year" in 2012. He also received a "Superior Performer" Award. Later, after Reese had observed him for a few days, Reese saw much potential in Jack's future but felt compelled to warn him away from the CIA who Reese assumed would take notice of Jack's unique talents as they had done himself.

In his 2013 evaluation report, his commanding officer, Captain Jenkins marked his performance level 5 in all categories indicating that he greatly exceeded naval standards. Jack and RJ both worked in logistics and were responsible for the mail aboard ship and in port.

While his ship, the USS Colorado was docked in NYC for Fleet Week 2013, Jack and RJ left the ship together for a one day liberty, each responsible to make sure the other returned to the ship before midnight. They visited a dive bar in Hell's Kitchen where they participated in a bar brawl with a group of marines. Later, they visited an underground nightclub where RJ picked up a prostitute. When RJ did not return an hour later as agreed, Jack became concerned and began looking for him. He suddenly found himself the target of an ambush by a group of Force Recon marines who were being transported aboard the Colorado following their latest mission. They demanded information from him that he did not possess but they did not believe him so they tried to kidnap him for interrogation but Reese saved him by posing as the team's driver. Jack was shot in the arm during their escape and awoke to find Shaw treating his wounds.

RIP, the recon team leader contacted him and told him that they had RJ as their prisoner and would kill him if Jack did not help them. RJ had discovered a large number of uncut diamonds that the recon team had stolen while rescuing a mining ship that had been taken over off the coast of Somalia and had stolen some for himself. RIP directed Jack to a hotel room where he and Reese found RJ strapped to an IED.

With the help of the entire team, Jack and RJ were saved from being killed. Jack sought advice from Reese about his future and expressed his desire for a normal life and pointed out a couple in a bar who appeared quite happy together. As a gesture of his decision to continue his military career, Jack asked the bartender to send the happy couple two glasses of champagne and then slipped into one of them a large uncut diamond that he had been holding on to. (“Liberty”)