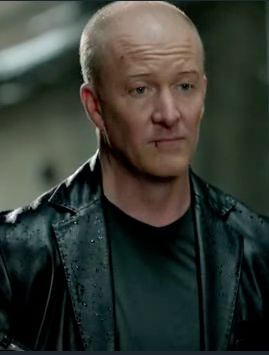 Detective James "Jimmy" Stills was a corrupt NYPD officer and a member of HR.

Stills' relationship with Fusco began when he was Fusco's partner early in Fusco's career. He was responsible for drawing Fusco into his criminal activities and HR. (“In Extremis”)

Stills was a member of Diane Hansen's ring, and took a leadership role among the men. After his kidnapping attempt of Michael Pope was stopped by John Reese, his badge was taken by the latter.

Stills was later tasked with executing James Wheeler, Hansen's ex-boyfriend and co-Assistant District Attorney who suspected of her shady business. Stills brought along with him an ex-con Wheeler put in jail to frame for the murder. Learning of the presence of Wheeler's son, Henry, Stills was confronted once again by Reese, who warned him not to attack the father and son. After a brief stand-off, with Stills using the ex-con as a human shield, Reese shot and killed Stills with Fusco's gun and placed his body in the trunk of Detective Fusco's car. (“Pilot”)

As Carter and Fusco protect the surviving Mafia Dons, Don Vittorio Zambrano tells Carter that she can't trust Fusco as he used to run with Stills who he calls a dirty cop who disappeared a few months before. Zambrano tells Carter that Stills and his gang shook down low-life drug dealers and pimps and "even did some wet work." As Carter considers Zambrano's words, they are interrupted by Elias before Zambrano can elaborate further on Fusco and Stills' corrupt activities. (“Flesh and Blood”)

While confronting four Aryan Brotherhood gang members, Reese uses Stills' badge to talk to Leon Tao. After learning that the gang members want to kill Tao, he admits that the real Stills probably would've taken the deal they offered him but he's not Stills. When questioned who he is, Reese tells them he's the guy that shot Stills and stole his badge. He then takes advantage of the confusion his statement causes to kill the gang members and escape. (“The Contingency”)

As she continues investigating the disappearance of IAB detective Ian Davidson, also a member of HR, Carter begins to get suspicious about a connection between Davidson and Stills' disappearances, noting that two cops disappearing in one year with their bodies never being found is strange. Carter asks about Fusco working with Stills at the Fifty-First Precinct before, but Fusco just tells her that it was a long time ago. Fusco later attempts to tell Carter the truth about his past and his connection to Stills and Davidson, but she refuses to hear it. (“One Percent”)

Under orders from HR, Azarello told IAB all about Fusco's activities with Stills and his gang. IAB Detective Joseph Soriano began investigating Fusco for Stills' murder and was able to piece together the location of Stills' body in Oyster Bay. Fusco eventually told Carter, who had overheard his interrogation through a forced pairing of Soriano's phone, the truth about his activities with Stills. While horrified by Fusco's past as a corrupt cop, Carter borrowed Reese's attack dog Bear and used him to locate and dig up Stills' body. When the police dug up the same location the next morning, Stills' body was gone, leaving them with no proof against Fusco. Fusco is fully cleared when Elias gets Azarello to recant his confession of Fusco's activities with Stills. (“In Extremis”)

Reese, using Stills' Detectives' badge, saved Grace Hendricks from Decima's initial attempt to kidnap her in order to bring Finch out into the light. Reese and Shaw took Grace to the 8th precinct and asked Fusco to help protect her. While waiting in a side room, Grace noticed a poster on the board seeking information about the whereabouts of the real Detective Stills. (“Beta”)

Reese has used Stills' identity as an NYPD detective multiple times to gain access to crime scenes or to people: