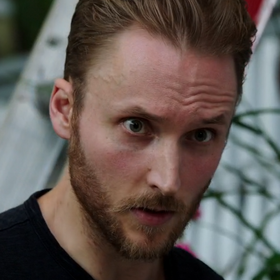 Jeffrey Blackwell is an ex-con recruited as a potential asset by Samaritan's team.

Somewhere in the early 2000's, Blackwell killed a person in a car accident. As a result he was convicted of manslaughter, and sentenced to 12 years in prison. He was paroled on November 3, 2014. After leaving prison, and despite being willing to work hard and put his past behind him, he finds only menial, low-paying jobs because he is an ex-con.

Blackwell's number is one of the 30 other numbers that came up in “SNAFU”, while the Machine was unable to interpret the intent of actions. Reese monitored Blackwell for a time, until he came to believe that Blackwell was not a threat. Later, while attempting to find a better job, Blackwell is recruited by a Samaritan asset named Mona, unknowingly, as a prospective Samaritan agent.

In “ShotSeeker”, Blackwell first can be seen monitoring Fusco. Later he is sent to the Cooper's apartment in order to find a hard drive that was dangerous for Samaritan. He was interrupted by Root, who took the drive. Before leaving she told Blackwell that he is working for Samaritan (without giving all the details).

In “Reassortment”, Blackwell is seen in the restaurant with his former girlfriend. It is revealed that while being in prison, Blackwell stabbed an inmate, and as result he got 12 year sentence instead of 7. After breaking up with his girlfriend he can be seen with Mona, as she offers him one more job - getting inside the hospital and infecting 2 people with a deadly virus. Blackwell nearly succeeds in infecting a doctor, but is stopped by Fusco, who had tracked Blackwell down after connecting him to the bodies of over a dozen people in a tunnel, including Bruce Moran. Blackwell injected Fusco and the nurse he was targeting and escaped, later meeting with Mona who told him he had accomplished his mission as it was all a setup to get everyone's DNA in the NHC DNA database. Mona also explains that Blackwell is genetically immune to the virus and thus wasn't harmed. Due to Root getting the cure to the virus with the help of the Machine, Fusco and the nurse survive Blackwell's attempt on their lives, but the nurse sustains permanent kidney damage.

Despite doing various tasks for Samaritan, Blackwell is not aware of its real nature.

In “The Day the World Went Away”, Blackwell sets up as a sniper, with the mission to take out Finch. When Root sees him, she makes an evasive maneuver, but she ends up being shot instead. Later, in the hospital, Root succumbs to the injuries from the shot.

In “.exe”, Fusco is captured by Samaritan operative Martin LeRoux. Fusco tells LeRoux what he knows about the bodies found in the collapsed tunnel and identifies Blackwell as the killer. While LeRoux is impressed by what Fusco knows of the situation, he informs the detective that Blackwell wasn't the killer of those people but rather LeRoux himself.

In “return 0”, Blackwell leads an attack on the subway station the Machine is housed at but is captured by Fusco and Shaw. Shaw realizes he is Root's killer by his weapon, but Blackwell severely injures Fusco and escapes. A week after Samaritan is destroyed, Shaw tracks down Blackwell who tries to convince her he was just doing a job. Shaw tells Blackwell that she once would've killed Blackwell without thought, but met people who taught her the value of life. Blackwell tells Shaw that those people wouldn't want her to kill him, to which she agrees before stating that those people are now dead. Shaw then shoots Blackwell twice in the chest with a silenced pistol, killing him in revenge for Root's murder.