Person of Interest Wiki
Register
Don't have an account?
Sign In
Advertisement
in: Needs Update, Characters, Male Characters,
and 7 more 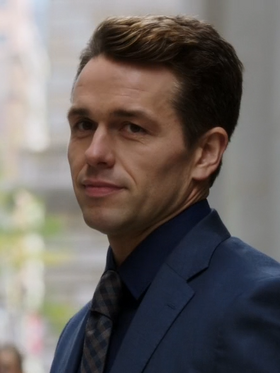 Jeremy Lambert was a high ranking operative for Decima Technologies and a Samaritan agent. He was also John Greer’s right-hand man.

In 2010, posing as Ian Banks of the SSCI Lambert meets with Daniel Casey. Casey demanded protection from the SSCI before he told "Banks" about what he'd gotten on the government's corrupt activities and Lambert promised him anonymity if Casey told him what he had on the government. Suspicious of Lambert, Casey asked for the year of the SSCI's funding and when Lambert took too long to answer, took off out the back door, having realized Lambert was a fraud. Outside, Casey was apprehended by CIA agents John Reese and Kara Stanton who were facing off with Rick Dillinger. As Stanton began loading Casey into a stolen car, Lambert and two other Decima Technologies operatives opened fire on them. After Reese and Stanton took out his men, Lambert fled.

That night, Lambert meets with John Greer in an alleyway, telling him that the CIA was bolder than they expected and tried to grab Casey in broad daylight. Lambert explains that a third party got Casey away from the CIA and one of their operatives was captured. Though Lambert offers to go after the operative, Greer refuses, stating that the operative can take care of himself. Greer orders Lambert to find Daniel Casey or he will find someone else who can do the task. Lambert agrees and walks away.

Lambert leads two more Decima agents to the office of Lester Strickland, Casey's friend in hopes of finding him there. However, he instead finds Stanton who uses Strickland as a human shield and informs Lambert that he's too late as they already have Casey. Lowering his gun, Lambert asks for just a few minutes with Casey before he lets the CIA have him and tells Stanton he only wants to ask Casey a few questions and this way, they all walk out of there alive. Telling Strickland he was never going to get out alive anyway, Stanton engages Lambert and his men in a gunfight, using Strickland to protect herself from the Decima agents bullets. Lambert's two men are killed but Lambert is able to escape with his life.

Lambert later contacts Greer to tell him that Daniel Casey is dead but he's tracked his laptop to Ordos, China. Greer congratulates Lambert on getting something right and orders him to assemble a team and go to Ordos to retrieve the laptop. (“RAM”)

As Greer, Finch, Control and Senator Garrison are about to be executed by Peter Collier and Vigilance, Lambert appears with a team of Decima operatives that opens fire on Vigilance. Most of Vigilance is killed while a few Decima operatives fall as well. When Collier emerges from hiding to kill a Decima operative, Lambert takes the opportunity to shoot him in the arm, disarming Collier and ending the gunfight. Lambert then reports to Greer that they have secured an extraction route and stands guard over Collier and Finch as Greer explains his plan to turn Samaritan into a god and orchestrates a bombing to kill a lot of people and get the government to give them the NSA feeds. After the bombing, Lambert kills Collier with two shots to the back and prepares to execute Finch on Greer's orders. As he fires, Lambert is shot in the arm by Reese, causing him to only hit Finch in the shoulder. As Reese and Bear rescue Finch, Lambert and Greer retreat. Though Lambert offers to organize everyone to chase the two, Greer tells him that they will soon find them all and contacts Garrison who grants them the NSA feeds.

As Greer brings Samaritan fully online, Lambert, his arm in a sling, reports that the feeds are coming in and watches as Samaritan begins categorizing everyone. Shortly afterwards, Lambert reenters the room and reports that Samaritan's higher functions are now online and they are searching for targets. A pleased Greer orders Lambert to "eliminate them all" and Lambert personally kills Vigilance member Steven E. Soto, killing a cop as well as collateral damage. (“Deus Ex Machina”)

When Samaritan takes control on New York for a day it sends Lambert to stop Rachel Farrow from attempting to kill her abusive husband. Lambert finds Rachel and convinces her that her husband would never hurt her again as Samaritan hacks his insulin pump and kills him from drug overdose. After leaving Rachel, Lambert talks directly into a security camera and calls out the Machine to talk with Samaritan.

He later finds Root and warns her of the consequences of defying Samaritan's request and after a tense standoff at a church with her and Reese gives the location for the meeting of the two machines. He is present with Greer when Samaritan initiates its attack on the stock exchange.(“The Cold War”)

Samaritan assigned him as "Samaritan Asset 401". (“The Cold War”)

When Samaritan crashes the stock market, Lambert leads a team of Decima agents to trap and kill Finch, Root, Reese, and Fusco, who are attempting to save the world economy. In the Machine's first simulation, Lambert shoots and kills Finch, preventing him from uploading the Machine's countermeasure, and causing the Machine to discard that simulation. In the Machine's second simulation, Lambert wounds Reese, who engages him in hand-to-hand combat, before killing Reese with several point-blank shots to the stomach. In this simulation, Reese manages to steal Lambert's Samaritan-issued grenade, killing Lambert and two other Decima agents, but this simulation is also discarded as the simulated Reese was unable to upload the countermeasure before Lambert shot him. In the actual timeline, Shaw is able to deliver an access code to her teammates, allowing them to enter the server room without setting off an alarm, and avoiding any confrontation with Lambert. However Lambert tracks the team on their way to the elevator and in the ensuing firefight manages to shoot Reese in the back while he protects Finch. (“If-Then-Else”)

Lambert is later put in charge of twisting Sameen Shaw's mind while she is in custody by Samaritan. He convinces her to kill a scientist for Samaritan making her believe it was just one more simulation Shaw was going through. (“QSO”)

After Shaw sedates a nurse in another escape attempt, Lambert is just amused until he and his men find a fire axe gone and a hole in the wall behind a sink Shaw used to escape. Lambert puts out an alert and eventually tracks Shaw to a Johannesburg prison. Holding Shaw at gunpoint, Lambert tries to convince her that its just another simulation, using the confusion from the over 7,000 simulations she has gone through to his advantage. Apparently believing him, Shaw drops her fire axe and Lambert tells her that Greer will soon remove her from the simulation. Before Lambert can react, Shaw draws a gun she took from a prison guard and shoots Lambert in the chest, telling him that simulation or not, she needed to "get that out of my system." Lambert dies moments later of his wound and Shaw steals his vehicle to continue her escape. (“Reassortment”)