View source
watch 01:36
We're Getting Mutants in the MCU - The Loop
Do you like this video?
Play Sound
Jessica Arndt 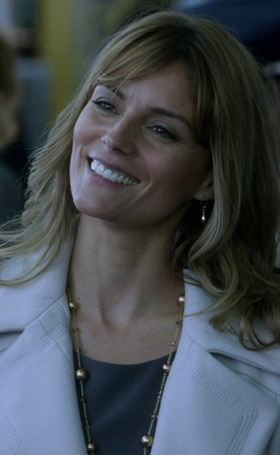 Jessica dated John Reese for approximately 6 months prior to September 2001. (“Pilot”) At this time, she was living in Tacoma, Washington. (“Many Happy Returns”)

While on a vacation in Mexico on September 11, 2001, Jessica received a call from her mother, and claimed she was on a vacation with a female friend, keeping John a secret. In bed, Jessica jokingly asked Reese to quit the United States Army, unaware that he already had. Moments later, she witnessed the news coverage about the attacks on the World Trade Center. (“Pilot”) Her mother was aware of the relationship, but thought it wasn't good for her. Jessica's mother later tells Detective Carter that it was a "fling" while she was living in Tacoma, Washington. (“Many Happy Returns”)

Jessica ran into Reese at the airport and he told her that he had found a new, secretive job. She told him that she was engaged to a man named Peter and was moving back east, though she would wait for him if he told her to. Getting no response from Reese, she turned and left. Moments later, he whispered the words to himself. (“Mission Creep”). Reese let Jessica go because he felt she deserved someone better than him, someone who could always be there for her like Peter. (“Many Happy Returns”) Reese would later point to the moment as the one that most changed his life and led him to become "the man in the suit". (“Liberty”)

At some point after their interaction, on Reese's first day as a CIA agent, his handler, Kara Stanton, showed him a surveillance picture of the two of them at the airport, and instructed him to forget about Jessica. (“Foe”)

Jessica's number came up in The Machine during the meeting where Finch and Ingram debated the morality of overlooking the numbers coming up on the irrelevant list. (“Ghosts”)

While operating illegally in New York, Reese met with Peter, who was now married to Jessica, at a bar. As Jessica arrived, Kara Stanton convinced Reese to leave just before Peter could "introduce" her to him. (“Blue Code”)

Reese and Stanton were in Morocco interrogating a suspect. While Stanton was busy with the suspect, Reese received a voice mail call from Jessica who sounded distraught. Reese called Jessica back and asked her what was wrong. Although she didn't divulge anything, Reese promised that he was coming to get her the next day in New York and told her to wait for him, and she promised that she would. However, Reese is denied leave, as he and Kara Stanton are commissioned on a special assignment to China by Mark Snow. Reese later tried to call Jessica again but she didn't answer. (“Matsya Nyaya”)

After Jessica left a voice mail for Reese, a jealous Peter confronted her and she was visibly frightened by him. They started arguing and Peter assaulted and accidentally killed Jessica when he pushed her and she bashed her head against their kitchen counter. He intended to call an ambulance, but later decided to cover up the murder by staging a car accident. (“Many Happy Returns”)

Reese later attempted to contact her after escaping from Ordos. He went to the hospital she had worked at in New Rochelle to inquire about her, but discovered she had died two months previously. Without knowing it, he encountered a wheelchair-bound Finch in the hospital after learning the news. The Machine had been giving Finch Jessica's number over the years, but he had originally been unable to ascertain why it kept appearing. He eventually discovered that it was because she was living with someone who was abusing her. However, the discovery came too late, and Finch was unable to help her before she died.

Reese later broke in and confronted Peter at his home. It is unknown if Reese killed him, or took him to across the border to Mexico and framed him for drug running, as no corpse was found. (“Many Happy Returns”)

Her death had a significant impact on Reese, leading him to alcoholism and contemplating suicide before his meeting with Finch. (“Pilot”)

Carter began investigating Jessica's death after Agent Donnelly invited her to help investigate Peter Arndt, whom they believed was murdered by Reese for owing money to a loan shark. Carter discovered an official autopsy report dated 12/07/10 suggesting her death was caused by a car accident, however Carter's investigation led her to discover that Jessica was abused by her husband and was killed prior to the "accident". The cause of death was blunt force trauma to the head and a broken neck. She also discovers Jessica's past relationship with Reese and is able to use the information to get Reese's personnel file. However, Carter ultimately destroys the file and the evidence of Jessica's murder to protect Reese, keeping only a picture of the couple she found among Jessica's things. (“Many Happy Returns”)