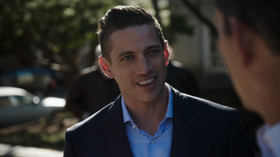 Joseph "Joey" Durban is an Army soldier and a former member of a crime ring led by Sam Latimer, along with Straub and Teddy Dalloway.

Joey has a fiancée named Pia Moresco, whom he has known since they were kids. He joined Latimer's crime ring to help support the family of another marine who was killed in Afghanistan after they swapped seats in a Humvee. Under Latimer's leadership, Joey and the rest of the crew mainly carried out high-end robberies.

Reese joined the team to protect Joey's life, which he was able to do successfully. But to protect him from Latimer, who later betrayed them, Reese convinced Joey to leave the city with Pia. He promised Joey that the family of the Marine killed in Afghanistan would be looked after. (“Mission Creep”)

Four years later, while Reese is trying to stop a Presidential assassination, he is approached by Joey who tells him that he has turned his life around since they last met, getting a new job and marrying Pia. Reese brushes off Joey to go after the terrorists Secret Service mole, explaining to Fusco and Shaw who Joey is.

After getting Reese and Shaw out, Joey leads Reese to a meeting with Fusco, Logan Pierce and Harper Rose. The three former POIs explain that they now perform a similar function to Finch's team: like Reese and the others, the Machine sends them numbers and they protect the numbers. Pierce explains that while Reese's team was given the relevant number of the President, his team was given the irrelevant number of Reese and had aided them from the background. After speculating on the number of other similar teams out there, Joey, Pierce and Harper depart to go after a new number they have been given. (“Synecdoche”)

Retrieved from "https://personofinterest.fandom.com/wiki/Joey_Durban?oldid=79871"
Community content is available under CC-BY-SA unless otherwise noted.