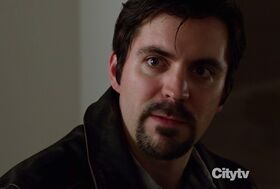 Jordan Hester is a barback and an ordinary man whose identity had been stolen by a female drug manufacturer named Tara Verlander (a.k.a. Mary).

At first, Reese and Finch believed he was an identity thief and criminal, but they later learned that he was in fact the victim of identity theft.

Hester came up with a plan to take down Verlander and her gang all by himself but ran into trouble when her men recognized him. Reese rescued him and with the help of Finch and Fusco, they were able to bring down Verlander's whole operation. Verlander was arrested and Hester got his life and freedom back.