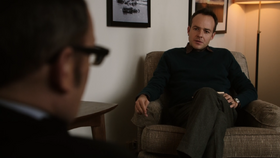 Reese and Finch try to protect a psychologist whose unorthodox methods for helping his patients find closure could cost him dearly. Meanwhile, flashbacks reveal Finch's fragile state in the days following the bombing that killed his best friend, Nathan Ingram.

Karma is the Asian religious principle that one's past actions influence one's future life. In more common usage, karma is the belief that we each get what is coming to us as a result of our previous acts.