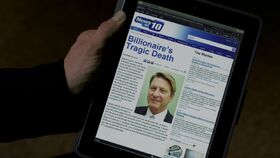 When Carter finally comes face-to-face with Reese, he urges her to join forces to help with their latest POI, a scrappy young woman from the wrong side of the tracks who turned her life around and became a lawyer.

The title of this episode could be a nod to the computer term Legacy.  A legacy system is an old method, technology, computer system, or application program, "of, relating to, or being a previous or outdated computer system." Often a pejorative term, referencing a system as "legacy" often implies that the system is out of date or in need of replacement but is too widely implemented to do so.

It could also double a nod to Nathan Ingram's death and what he would leave behind for his son to inherit.