Person of Interest Wiki
Register
Don't have an account?
Sign In
Advertisement
in: Characters, Persons of Interest, Recurring Characters,
and 2 more

View source
watch 01:36
We're Getting Mutants in the MCU - The Loop
Do you like this video?
Play Sound
Leon Tao 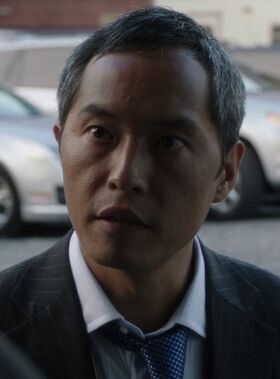 Leon Tao is a former forensic accountant and three-time Person of Interest. He is targeted to die by the Aryan Nation, the Russian Mafia and Nigerian fraudsters and is always saved by the timely intervention of Reese and Finch. He returns the favor by helping them out with persons of interest that require his skills.

After receiving an MBA from New York University, Leon began working as an accountant at the firm of Bear Stearns, until he was downsized when the firm was sold to JP Morgan when the recession hit. He then took a job at what he believed was a small start-up business, which was in fact the corporate arm of the Aryan Nation; and he was laundering money from their methamphetamine sales.

The Machine produced his number after he stole eight million dollars from his employers and lost a large portion of it in the stock market. It's hard to say how much he actually lost, as he repeatedly lied about the actual amount. Leon took one million in bearer bonds and attempted to run away. He was captured by Byron and several other operatives of the Aryan Nation, but Reese helped him escape, although the one million in bonds was chewed up by Byron's former attack dog. Following this incident with the bearer bonds, Reese names the dog Bear (“The Contingency”).


His number came up again after he got involved in gold farming and subsequently found himself in trouble with the Russian Mafia. Reese took care of the assailants after they threw Leon through a window. He was then blindfolded and brought to the Library because Reese didn't know how else to protect him while he and Finch were out saving another number.

Leon eventually made himself useful by helping Finch track down the people threatening Madeleine. He also made friends with Bear by sharing a bowl of instant noodles with him. After he successfully assisted Finch and Reese, he told them that he was not the kind of guy to let them down (“Critical”).

Leon posed as an EMT to help Finch and Reese "abduct" Sameen Shaw after she was supposedly murdered by Hersh. He revealed along the way she tried to strangle him so he drugged her and warns them to keep their distance before leaving (“Relevance”).

Leon became a person of interest for the third time after he tried scamming a group of Nigerian scammers. Reese and Bear arrived just in time to protect Leon from getting his intestines cut out. Bear was very happy to see Leon again.

When an elderly gambler's number came up, Leon joined Finch and Reese working undercover in a casino by pretending to be Jason Bao, a playboy millionaire with a taste for pink-haired girls and tequila. (“All In”)

Reese left Bear in Leon's care while he and Shaw went looking for Root and Finch after they went after the Machine (“God Mode”).