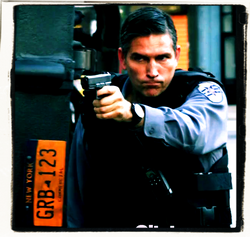 The prop master for the show maintains a number of actual NY state licence plates that are not assigned and are considered to be "clear". Some plates have been seen in other television programs such as ABC's "Castle". For reasons of privacy, the producers must check with the New York Department of Motor Vehicles to make sure the plates they use on TV are not assigned at the time of filming. They have been known to digitally obscure or sometimes edit plates used a second or third time in an episode. This differs from California, which reserves all license plates beginning with the letter Q for television productions.

One trick of the trade a show may use is to visit the NY state DMV website's vanity plate generator to see if a random letter/number combination is available, and then print out a plate using a laser printer, although this method is normally not used when a close up is required.

Marked police and emergency vehicles are rented from the city as needed, however, the stars unmarked cars that reappear throughout the series are provided through product placement contracts with major auto companies. The NYFD ambulance (#52) seen in a variety of episodes is a decommissioned city vehicle owned by a prop company.

The NYC Film Office posts notices in the area of the city where filming will be taking place. Any privately owned vehicles that are in this area are considered to have provided consent for their plates to be broadcast, although this is a rare occurrence.

Assigned to the NYFD ambulance as seen in:

Sightings in Other TV Shows