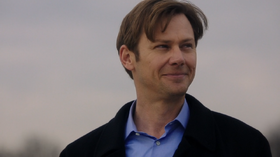 Logan Pierce is the founder and CEO of the social networking website friendczar.com that he started with his best friend Justin Ogilvy. He is a self-made billionaire.

His father owned a camera shop and continued with it until film became extinct and he failed to adapt to selling digital, as a result they went bankrupt. Since then, Logan has vowed to accept change as inevitable so it doesn't crush him and just keeps moving forward. He has a genius-level IQ but dropped out of college as he had other aspirations. He and Justin had been friends for over 10 years since their time at CalTech. When they started friendczar.com Justin took over the business side of things while Logan became the face of the company.

Reese met him under the alias John Wiley as a hedge fund manager and piqued his interest. Reese finds it extremely difficult to keep up with Logan as he is extremely wealthy with unlimited resources and always breaking rules to get his way. Reese finally confronts him in his office and tells him that his life is in danger and he can only protect him if Logan lets him stick with him for the next 48 hours. Logan agrees.

Logan was looking to drop his lawyer Jeremy Campbell. So Jeremy spiked his drink with Naproxen, which Logan was allergic to, to try and kill him. However, Reese was able to save his life. Logan however followed Reese and found out that he was meeting with Finch, who had earlier met Logan posing as a dry cleaner. He figures out that Finch is the brain and bank of the operation and that Reese is former special ops or ex-CIA. He also finds out that Reese and Finch don't officially exist. He is impressed that they have managed to maintain their anonymity and wonders why they do what they do.


With the help of Carter and Finch Reese exposes Jeremy as the culprit but leaves disgusted when he realizes that Logan doesn't care about his security.

Despite Reese's recommendation to lay low for a while, Logan's number comes up again while hiding in St. Petersburg, Russia. It turns out that Pierce's best friend Justin Ogilvy decided to kill him when he found out that Logan was going to go into business with Emily Morton, whose social networking program would have cannibalized friendczar.com. Reese was able to intervene again and save Logan's life while Justin was arrested.

Logan was removed as the CEO of friendczar.com following his erratic behavior and publicly telling people to hold off on buying friendczar's overvalued stock. But following his philosophy of not letting change affect him and moving forward, Logan decides to go into business with Emily. He meets with Reese who deduces that Logan already knew about Justin but didn't warn Reese as he wanted see how he works. Logan says that he figured out that Reese does what he does out of altruism. Before leaving he gives Reese a present: an expensive watch like the one Logan wears which is accurate to a nanosecond. But later Finch smashes the watch on the ground, revealing a GPS inside, and tells Reese that Logan is just curious enough to be dangerous. Reese muses on the risk posed by an eccentric billionaire with bottomless pockets and a need to know things. (“One Percent”)

After getting the relevant number of the President of the United States, Reese spots Pierce arriving at a fundraiser where the President will potentially be targeted. Pierce helps Reese get inside, telling Reese that he is now "championing a new cause" and after a threat message is posted everywhere, Reese suspects Pierce of being one of the terrorists due to his hacking skills. However, Pierce escapes before Reese can catch him. When Reese suspects Pierce, Fusco tells him that Pierce is all over the news for refusing to share data with the NSA, enhancing their suspicions of Pierce.

After the terrorist plot is foiled, Joey Durban and Harper Rose bring Reese and Fusco to Pierce who reveals that the three of them now work as a team protecting numbers for the Machine, the new cause Pierce had mentioned he was working for to Reese. Pierce is revealed to have called in an anonymous tip to the Secret Service about the terrorists after the threat was over and cut the power to Tracey Phillips' home, allowing Fusco to rescue Shaw. The group speculates on how many more teams the Machine has but none of them know for sure. Pierce gives Reese a picture of Finch, the next person the Machine wants Reese to go after before departing with his own team to save their next number. (“Synecdoche”)

Retrieved from "https://personofinterest.fandom.com/wiki/Logan_Pierce?oldid=81730"
Community content is available under CC-BY-SA unless otherwise noted.