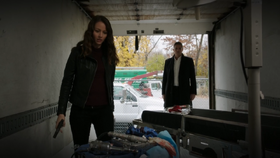 Reese and Root’s hunt for Shaw takes them to a small town in upstate New York where it becomes apparent that not everything is as idyllic as it seems. Also, Fusco teams with a former POI to tackle the newest number.

M.I.A. is the acronym for Missing In Action, a military term used to describe troops who cannot be found or have not returned to base after an engagement. In this case, Shaw can be termed M.I.A. because the team cannot determine her whereabouts, or whether she is dead or alive.

Although the Person of Interest trilogy of episodes was promoted by CBS as ending with “Control-Alt-Delete”, writer Ashley Gable tweeted that it was actually a quartet, ending with this episode.