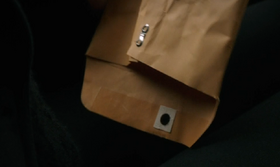 A manila envelope is an envelope designed for transporting documents.[1]

Harold Finch and Root have used these envelopes to provide people with a new identity. Usually the envelope contains money, a passport issued under a new name, car keys, and other items or documents to help people start a new life.

On some occasions, other items are stored in buff colored envelopes as well.

Finch provides Henry Peck with a new identity after confirming the existence of the Machine. The envelope contains a clean passport, plane tickets and a bank card to a well-funded account in Peck's new name. This is the first time Finch supplies a person of interest with new documents. (“No Good Deed”)

Grace receives a yellow envelope from Reese which Finch prepared for her in order to protect her from Decima. It contains a passport with Grace's new identity, Grace Ellsworth. Grace would use the new identity to move to Italy where she was hired for a new job. (“Beta”)

Root hands out envelopes to Jason Greenfield, Daniel Casey, and Daizo after they helped her set up servers to prevent Samaritan from finding them. Root prepared carefully crafted identities that would allow the team to hide from Samaritan. (“A House Divided”)

Finch and Reese also received those envelopes from Root. Each envelope contains money and a driver's license with a new name. Shaw's envelope included car keys and a prepaid cellphone. (“Deus Ex Machina”)

Bela Durchenko prepares an envelope for Root containing a passport with a new identity. (“B.S.O.D.”)