View source
watch 01:36
We're Getting Mutants in the MCU - The Loop
Do you like this video?
Play Sound
Mark Snow 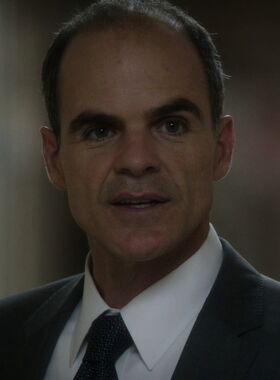 Mark Snow is the alias of a CIA field agent, at one time partnered with Tyrell Evans. He was John Reese and Kara Stanton's handler in the CIA. He also claimed to be Reese's best friend. (“Number Crunch”)

Snow was the handler for CIA field agents John Reese and Kara Stanton, operating in New York City. They had a government employee in their custody who had committed treason by attempting to sell software to the Chinese. Positive they weren't going to get a call regarding their prisoner, he allowed Reese to head out to the city for some R&R. (“Blue Code”)

Snow was in Morocco while Reese and Stanton were interrogating a suspect. Alongside Alicia Corwin, he gave orders to Reese and Stanton to go to Ordos, China to retrieve a laptop containing information pertaining to a computer virus that could disable nuclear programs. Snow had been ordered to tell each agent that the other was compromised and should be "retired" (i.e. executed). The plan however, failed when Reese realized they'd been set up after Stanton shoots him, and tells him it was because he was compromised. Reese then tells her that he was ordered to do the same thing to her. They escaped separately just before a missile strike impacted their supposed extraction point. (“Matsya Nyaya”)

When Reese's fingerprints were run through the system after his confrontation with Anton O'Mara in the subway, the CIA were alerted that Reese had survived the missile strike in Ordos. Snow visited the precinct where Detective Carter worked and asked her a few questions about Reese. Both Snow and his partner began to follow her, but she eventually caught on to them.

Snow had a talk with Carter at a diner afterwards in which he showed Carter that Reese was a cold blooded killer. He convinced her to set a trap to capture Reese, though his true intention was to have him killed. However, the trap failed as his partner Evans took non-lethal shots, allowing Reese to escape in Finch's car with Carter's, although not without serious injury. (“Number Crunch”)

Snow and Evans initiated surveillance of Carter, believing she helped Reese escape. He constantly had operatives tailing her, though they were unable to track her effectively and she managed to evade them. Later, he received intel, planted by Lionel Fusco at Finch's request, that Reese had escaped to northern Connecticut where his fingerprints were found on a prescription bottle at a veterinary clinic, and immediately left New York. (“Super”)

Snow eventually returned to New York and confronted Carter, of whom he was still suspicious after realizing Reese was never in Connecticut. Later, he had to bail out a CIA operative known as L.O.S. who was selling drugs for the CIA in a scheme to fund the War on Terror. Bluntly telling L.O.S. that he warned him about getting caught "behind enemy lines", he had his head bagged and presumably killed in the back seat of an SUV. (“Blue Code”)

When the FBI established a task force to catch Reese, Special Agent Donnelly informed Carter that he didn't just want to apprehend Reese, but also expose Snow and the CIA's illegal operations. He claimed that Snow was the man who swept the CIA's domestic operations under the rug. (“Identity Crisis”)

Unhappy with the FBI's investigation into Reese, Snow paid another visit to Carter with Evans and warned her not to co-operate with Agent Donnelly. The next day, he received some intel supposedly regarding Reese from a North Korean contact who had aided a CIA agent who escaped from China. Both he and Evans entered a hotel room, but were ambushed by Stanton, who had also survived the Ordos shelling. Evans was killed, while Snow was wounded as Stanton approached him, wanting to "catch-up". (“Matsya Nyaya”)

Following the ambush, Snow has been held captive by Stanton, who locked him up in a storage room and forced him to wear a bomb vest to prevent him from escaping. From time to time, he would be released to "run errands" for Stanton, presumably to help her find out who had set her up in the Ordos mission.

While at the morgue looking into the Alicia Corwin case, Snow accidentally ran into Carter. He told her that he had been re-assigned and was no longer trying to catch Reese.

When Carter tried to call Snow's CIA phone, she was redirected to another man who also appeared to be looking for Snow. (“Masquerade”)

Snow killed a janitor named Dusan Babic on Stanton's orders, so that he could use his ID to get into Fujima Techtronics. As he had no other way of communicating with her, Snow left Carter's card in the dead man's pocket with Fujima Techtronics address on it. Carter followed Snow's clues to Fujima Techtronics and saw him leaving the building. Carter followed and confronted him. Snow revealed that he is rigged with an explosive vest and tells Carter to tell John that,"she is planning something big." Before he can explain more, Kara opens fire from down the hallway, forcing Snow to run. (“Critical”) While at Fujima Techtronics, Snow stole an NSA-certified hard drive for Stanton. (“Dead Reckoning”)

When Reese awakens on a city bus, Snow is there with him and Stanton and greets Reese, showing him that he too has a bomb vest strapped to his chest. As Snow watches, Stanton tells Reese that she and Reese were never very good at being dead but she believes Snow will be. Stanton tells Reese she is forcing him and Snow to do "fieldwork" for her and departs the bus after giving them their assignments.

The two men travel to the people Stanton had sent the hard drive Snow stole for formatting to and the men assume they are federal agents and are working for someone with "very deep pockets." The men tell them that the drive has been formatted to Stanton's specifications, but the price has gone up another $50,000. Stanton orders them to kill the men and when Reese hesitates, arms their vests. As the men pull their guns on Reese and Snow, Stanton kills them with a sniper rifle and tells Reese that it was his only warning.

At a diner, Snow eats a burger and fries while Reese refuses to eat. Stanton tells Reese that Snow was the same way at first, controlling what little things he could, but came around eventually and so would Reese. Snow is amused and tells Stanton that she and Reese are damaged goods and getting them to kill each other was not just efficient but poetic. Snow explains that the airstrike was "just to make sure" and glares when Stanton points out it didn't work out well for him. On Stanton's orders, Snow and Reese follow two men out of the diner and attack them. Snow nearly strangles one man before Reese stops him and they are ordered to put on the two men, ATF agents, jackets, steal their car and ditch their phones after they get a call on one of the agents' phones with an address. Unknown to Snow and Stanton, Reese uses one agent's cell phone to send a warning text to Finch before they ditch it.

Arriving at the address, the two men discover that Stanton has called in a bomb threat and use their cover as ATF agents to get in and board an elevator. Following Stanton's instructions, they use the elevator to reach the 21st floor where Stanton tells them a Level 5 DOD facility is located with two Delta Force operatives guarding the elevator. Reese kneecaps the men and stops Snow from killing them, annoying Snow who is worried Reese's conscience will get them killed. Snow speculates that they are in a bioweapon facility and as they will soon drop out of contact, Stanton arms their vests on a fifteen minute timer as further incentive.

Making their way through the 21st floor, Reese and Snow take out the security desk and the alarms, cameras and backups for the past couple of hours. Continuing to follow Stanton's instructions, they locate a temperature-controlled room labeled Applied Research that Reese realizes is a cyber weapons lab, not a bioweapons lab. The two kidnap a technician named Kevin and Snow knocks out another guard before entering the lab where Kevin is forced to log in after which Snow takes over. Reese attempts to convince Snow to find a way to stop Stanton or at least her plan, reminding him that they are in a SCIF and she can't hear them. However, Snow sees it as impossible, having been unable to remove his bomb vest and is determined to follow Stanton's orders and survive.

Snow begins searching for a spot to place the hard drive while Reese takes Kevin aside and calls Finch. After discovering that the hard drives contain malware capable of taking down civilian infrastructure as well as military, Reese starts removing drives, resulting in them erasing themselves. Snow notices and fight Reese to stop him but is no match for his former friend. Stanton enters, deactivating their bomb vests at the last moment and reveals that she just needed them to clear the way and leads them to a Network Monitoring Area that Kevin explains monitors the government's most secure networks against cyber attack from which Stanton could reach everything. Stanton uploads a virus from the hard drive to the networks and rearms Reese and Snow's bomb vests to a five minute timer, refusing Reese's attempts to talk her down. Stanton locks Reese, Snow and Kevin in the room and destroys the door controls so they can't escape.

After Stanton escapes, Kevin overloads the room's power supply and Reese and Snow destroy the backup power, enabling them to escape. Reese tells Snow that they'll never catch Stanton in time and they need to get to the roof and away from innocent civilians. Annoyed with Reese's self-sacrificing attitude, Snow pistol-whips him to the ground and heads for the elevator, telling Reese that there's a CIA safehouse less than two blocks away and he sees it as his best shot. Reese tells Snow that even if he makes it, the CIA will see Snow as compromised and all that's waiting for him is a black hood. Snow considers it for a moment then simply wishes Reese luck as he departs in the elevator. Reese fires at Snow, but the closing elevator doors block his shots.

After getting the name of the man who sold the Ordos Laptop, Stanton enters her car and puts her phone and notebook down. Moments later she hears the sound of a bomb vest arming and turns to find Snow waiting for her in the back seat. Snow tells Stanton "you were right Kara, about me being dead. I'm gonna be great at it." Stanton desperately reaches for Snow's bomb vest but is unable to reach it in time. The bomb vest explodes, killing both Snow and Stanton. Reese, witnessing the blast from the rooftop after Finch disarms his bomb vest, realizes what Snow did and sadly comments that Snow retired after all.

After Snow's death, SAIC Brian Moss visits Carter and tells her that the FBI has identified the two suicide bombers who broke into the DOD facility as Snow and Stanton. As Snow matches the description of "the Man in the Suit", they believe him to be Snow and that Special Agent Donnelly got too close to the truth and Donnelly was killed for it. With Snow's death, the FBI hunt for "the Man in the Suit" is ended and the FBI stops chasing Reese. (“Dead Reckoning”)