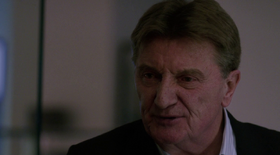 Martin Baxter was the owner of Rylatech and a spy for Decima Technologies.

Rylatech faced going bankrupt during the dot-com collapse, and Baxter saved the company by selling out to China and Decima Technologies. When leading Rylatech executive Monica Jacobs suspected someone of espionage at Rylatech, Baxter framed her as the spy. He later murdered Ross Haskell because he was a patriot and wouldn't come around to Baxter's way of thinking.

When Monica and Reese broke into Rylatech, he got the drop on them and held them at gunpoint. When confronted, Martin claimed that he was only protecting his company and knew that Monica and Ross couldn't be trusted with the truth because they believed that the company stood for something. However, Finch notified the authorities and sent the evidence to the FBI. As a result Greer called Baxter and told him that the time had come for the contingency and that his family would be provided for. Baxter then put the gun to his head and shot himself.

The next day, Rylatech's stock plummeted under rumors of espionage. The FBI launched an investigation and all of Rylatech's servers in government service were ordered to be replaced.

Retrieved from "https://personofinterest.fandom.com/wiki/Martin_Baxter?oldid=42394"
Community content is available under CC-BY-SA unless otherwise noted.