View source
watch 01:36
We're Getting Mutants in the MCU - The Loop
Do you like this video?
Play Sound
Martine Rousseau 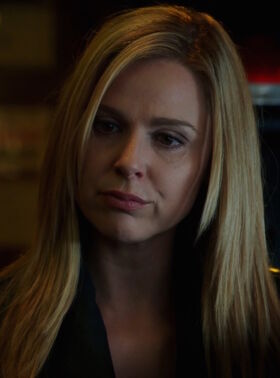 Martine S. Rousseau is an alias used by a key Samaritan operative. Her mandate was to eliminate threats to Samaritan's survival.

Speaking with a British accent, Martine is first seen at the Hajdú Budapest Hotel in Hungary, meeting with a journalist who has lost his job. The man shares his theory that an operation was designed to target companies developing artificial intelligence, believing his situation was the result. Martine initially pretends to be unaware of artificial intelligence's existence, but then begins acknowledging the man's situation, frightening him by listing subsequent events set to happen as they speak as they do. Pulling a gun, she informs the man that two other people are set to die in a traffic accident in Seattle within fourteen minutes. She then shoots him and leaves.

Later, under the identity of Megan L. Watkins of Homeland Security, Martine reemerges in New York, appearing at the site of Reese's takedown of The Brotherhood drug cartel and subsequent rescue of the son of Ali Hasan. She asks a nearby officer what happened and the officer says it was the result of a gang war. The woman doubts this, walking away and discarding her badge in a trash can. (“Panopticon”)

Rousseau is ordered by Samaritan to assassinate Governor-elect Michelle Perez after it rigged the election that led to her victory over Governor Murray. Perez dies while making her acceptance speech. Rousseau then is ordered to assassinate Simon Lee for potentially exposing Samaritan. She is outsmarted by Finch and Root, who save Simon after a gun battle in a hotel. (“Prophets”)

While searching for Shaw, Martine poses as a lawyer and threatens Katya Rodchenko into revealing the identity of Romeo. She finds Romeo and after killing his bodyguard, questions him regarding Shaw's whereabouts. Using the new intel she successfully tracks down Shaw at her cover job. (“Point of Origin”)

Martine engages in a firefight with Shaw but she manages to escape. Using the alias Sharlene Jacobs of the Drug Enforcement Agency, she attempts to use Detective Fusco to find Shaw but he calls her bluff and forces her to back down. (“The Devil You Know”)

She works alongside Lambert and ends up in a standoff with Root at a church while he delivers a message to The Machine about the location for the meeting of the two AIs. (“The Cold War”)

She lead the team of Samaritan operatives tasked with hunting and destroying Team Machine at the stock exchange. She shot Shaw who was overriding the elevator and thus saving Finch, Reese, Fusco and Root who where in there. (“If-Then-Else”)

It is implied that she gave orders to Leslie Thompson (Maryann Holst) when she awoke after heart attack and was assigned to manage Samaritan's facility, Carrow, in a small town upstate, Maple - which Samaritan turned into it's ant farm to study human behavior. Miss Thompson told that after heart attack "a blond woman" had told Maryann she'd been given a second chance and therefore had to follow incoming orders; she also had said that "a few must be displaced for the majority would thrive", commenting previous Maple mayor suicide and its leading neurosurgeon framing and arrest. (“M.I.A.”)

Martine leads a team of operatives to a Samaritan bunker after it is infiltrated by Reese, Finch, Root and Sulaiman Khan and engages in fistfight with Root but is easily defeated. She later brings a captured Khan to Greer who promptly executes him. (“Search and Destroy”)

Martine Rousseau was killed by Root inside Samaritan's base of operations. In spite of being restrained by multiple operatives, Martine's arrogance and continuous taunting to Root about torturing Shaw allowed her to momentarily break free from her restraints and rapidly break Rousseau's neck. Her death was virtually irrelevant to Greer, also present in the room.(“Asylum”)