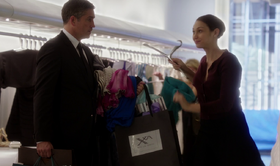 "Masquerade" is the third episode of season 2, and the 26th produced hour of Person of Interest. It originally aired on October 18, 2012.

With Finch back in the Library, Reese returns to field work, only to face his toughest case yet - protecting the privileged daughter of a Brazilian diplomat, Sofia Campos.