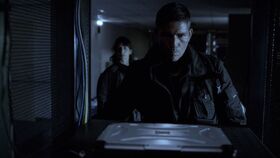 The Machine's latest mark puts Reese undercover as part of an armored truck crew, a case that brings back memories of his last CIA mission and painful decisions he was forced to make.

The title of the episode "Matsya Nyaya" (IPA: /mət̪s̪jə/ /nja:jə/ Sanskrit: मत्स्य न्याय‬) is a reference to a concept in Hindu mythology as "Matsya Nyaya Pranali", whose literal translation is the "law of the fishes". In the West, it is known as "law of the jungle" or that the strong will eat the weaker to survive. With respect to Hinduism, it refers to the fact that "the big fish eats the little fish", which is the universal "law of nature".