Person of Interest Wiki
Register
Don't have an account?
Sign In
Advertisement
in: Persons of Interest, Characters, Female Characters 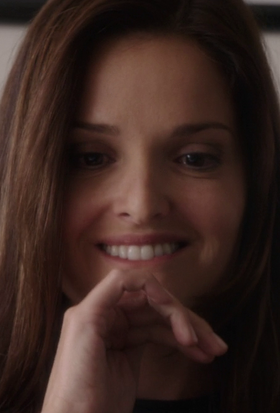 Maxine Angelis is a journalist working for the New York Journal. Her social security number came up when the Machine predicted that she would inadvertently cause the death of Christopher Zambrano.

Maxine was investigating and reporting on HR and its activities. As she was also investigating The Man in the Suit, Reese had to go on a date with her under the guise of an actuary, so that he could be close enough to protect her without giving her more evidence that he exists.

She was tricked by the real head of HR, Alonzo Quinn, into publishing an article which framed Christopher Zambrano for that role. As a result Zambrano was killed and Maxine's reputation was ruined. After meeting with Zoe Morgan, Maxine began to suspect that Ed Griffin was the head of HR and figured out that Vittorio Zambrano's HR ledger was likely at a carousel Christopher had restored. Maxine and Reese discovered the ledger, but were captured by Bogle and Pitt, two former corrupt FBI agents working for HR. The two were rescued by Carter and Fusco and during the gunfight that followed, Maxine got the ledger back. To her surprise, Maxine discovers Landon Walker's name rather than Ed Griffin's and sends the information to her boss. She is nearly shot by Bogle, but Reese shoots him in the shoulder from the side and claims not to have known what happened afterwards. Maxine turns the ledger over to Fusco and her reputation is restored with Maxine's story on Landon Walker being the head of HR becoming front page news.

She later thanked Reese and told him that even though she liked him, she's "married to her work" and she thinks he's hung up on Zoe Morgan and gives him a friendly kiss. After being asked by Reese, Maxine tells him that she will no longer pursue her Man in the Suit story, claiming that Reese is probably right that he's an urban legend. Maxine also tells Reese she figures if the Man in the Suit was real, she'd have met him by then and smiles at Reese, indicating she figured out it was Reese all along.