Person of Interest Wiki
Register
Don't have an account?
Sign In
Advertisement
in: Characters, Persons of Interest, Female Characters
English 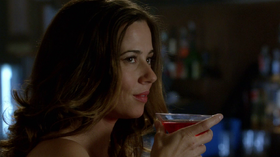 Dr. Megan Tillman is a physician who spent her adult life stalking her sister's rapist to get revenge.

Megan had a sister, Gabrielle Tillman, who was drugged and raped by Andrew Benton in college. Gabrielle filed charges two days later out of shame, and the physical evidence was inconclusive due to the delay. One year later she killed herself with a drug overdose. To get justice for her sister Megan decided to kill Benton.

She stalked Benton and successfully kidnapped him. She planned to kill him and dispose of his body using lye. However Reese found her and told her that that if she kills Benton in cold blood, it will destroy her, and that she’ll never really get away with it. She is a doctor who saves lives and taking a life would mean killing a part of herself. He convinced Megan that he would take care of Benton and that he would never hurt anyone ever again. In return she would get her life back and Gabrielle will get to keep her memory of her sister. Tearfully, Megan agrees. (“Cura Te Ipsum”)

Reese and Finch kept in contact with Dr Tillman, often calling in favors from her when they require some medical records. Finch asked her to call in Detective Riley to a medical dispensary for the purpose of investigating a new number. (“Blunt”)