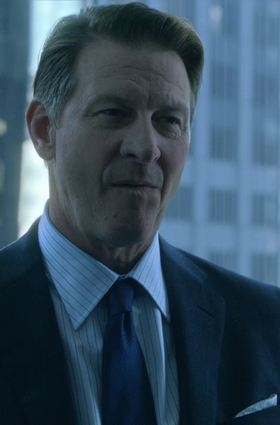 Nathan C. Ingram is the co-creator of the Machine, and the founder of IFT.

He founded IFT in 1983 (“The High Road”) along with his best friend and MIT classmate Harold Finch (known to him as Harold Wren), who disguised himself as an ordinary employee (“Ghosts”).

At some point, Ingram gave Finch a photo of their younger selves, and wrote "In the beginning... -N.I." on its back. Finch kept the photo in a copy of Arthur Koestler's "The Ghost in the Machine" (“Number Crunch”) (“God Mode”).

On September 11, Ingram visited Finch while he was working on a new program, in order to break the tragic news of the terrorist attack on the World Trade Center earlier that day. As they both watched the news in shock, Ingram told Harold that while they have changed as they aged, the world hasn't until this moment. Ingram proposed that they try to change the world for the better (“One Percent”).

Ingram at some point made contact with the U.S. government to build the Machine. Ingram acted as the public face of IFT and the man the government dealt with, keeping up the façade that he alone was building the Machine, while in fact Finch covertly began building it. While the government suspected someone other than Ingram was working on it, Finch was able to keep in hiding and they did not find proof (“Ghosts”).

Working with the Machine

On June 10, 2002, following another ceremony, and after dismissing half of his company's staff, (because of building the Machine) Ingram arrived at an abandoned office floor in the building, and discovered Finch's progress with the Machine. Supplied with the feeds from the NSA, the Machine could track and listen to all the citizens of New York. Finch told Ingram the next step would be teaching the Machine to pick out the terrorists from the general population (“Ghosts”)

Nathan and his wife Olivia were in the process of getting separated and Nathan was sad about his wife extending the trial separation. He kept on working as it was the only thing that took his mind off of his situation. When Finch demonstrated the latest progress with the Machine, Nathan remained skeptic, until he learned that the Machine had been well aware of his romantic encounter with a PhD student named Molly Cole on May 7, 2004 (“The High Road”).

Ingram met with Alicia Corwin, a government worker who supplied the Machine's various feeds. Corwin requested information regarding the progress of the Machine, and Ingram handed her the social security number of a DIA agent. The agent was later found to have been in collusion with the Iranian government to sell weapons-grade uranium.

After meeting with Denton Weeks to discuss the fact that the Machine couldn't allow a human to track specific people, Weeks threatened to reduce the payment for the Machine. He was dismayed to find that Ingram was providing it for a token payment of one U.S. dollar.

Ingram later celebrated with Finch about the Machine's success in discovering a traitor and got a closer look at how the Machine operated. It was at this time that the Machine identified Ingram as a potential threat (“Super”).

Nathan and Olivia separated after she couldn't take his lies anymore. He admitted to Finch while meeting in a restaurant that he didn't even remember all of the lies he had told her. He warned Finch that the truth always catches up to people (“Til Death”).

Ingram learned of the Machine's programming to ignore any "irrelevant" crimes: any attacks of a smaller scale than those that present a threat to the nation. Every night at midnight, the Machine would erase the list of potential crimes. Clearly disturbed by this piece of information, Ingram stood by as Finch stated that the Machine was not built to save "someone," but rather "everyone” (“Ghosts”).

Ingram came to realize that the people who were to receive the Machine were not entirely trustworthy. During a meeting with Alicia Corwin, he accidentally let slip that eight people knew about the Machine rather than seven. Later, he tried to convince Finch to make a back door into the Machine, only for Finch to refuse. Just prior to shipping the Machine, Ingram used his administrative access to install a new function named "contingency". After creating the backdoor, the Machine was relocated to its new home (“No Good Deed”).

After the Machine was shipped out on a freight train, Ingram met with Finch in their now empty laboratory. Finch told him that he had been thinking about Ingram's desire to help people, and proposed they use their wealth to invest in new projects, such as clean water initiatives and sustainable farming. Ingram retorted that Finch just gave away the "single most powerful technology known to man", but Finch insisted that the Machine saves lives. Ingram said that it doesn't save enough lives and went on to imply that he had built a backdoor function. Finch was angered and reminded Ingram of their agreement not to "play God". Ingram said he was not proud of the agreement. Finch simply stated that they either move on to the next thing together or they don't.

Ingram left the meeting and the Machine sent him the number of a woman named Anna Sanders. Ingram researched and followed her, discovering that she had a restraining order out against her ex-boyfriend because of domestic violence. While watching her from his car one night, he saw a suspicious-looking man with a hood and hat concealing his face. Ingram pulled out a pistol and got ready to follow them (“One Percent”). Ingram was able to subdue the man and reporting a call of shots being fired and shouting, the police found the man tied up in Sanders' living room and enough proof to arrest him (“Zero Day”).

After having coffee one day, Ingram's phone rang, and he started walking. He was unaware that Finch was following him. He went into an abandoned library, where Finch confronted him. Finch looked around, and deduced that Ingram had accessed The Machine's Irrelevant Numbers. After an argument, Harold got on a laptop, and entered several computer codes. Unable to halt the contingency program, Finch rescinded Nathan's Admin status, not noticing Ingram's number coming up before the contingency shut down (“Zero Day”).

Days after Finch found the Library, he returns to it to find Ingram taking down his board. Ingram tells Finch he has quit IFT and has set up a meeting with a reporter to expose the existence of the Machine. Finch warns Ingram against it, telling him that all of the engineers that Alicia Corwin hired to reassemble the Machine upon arrival have either disappeared or suffered strange accidents and believes the government will kill Ingram if he tries to go public. However, Ingram just sees Finch as paranoid and believes Finch has never trusted anyone including himself and Grace. Finch asks what he can do to stop Ingram who asks for Finch to restore his access the Irrelevant List and possibly even work together to save the people on it. Finch finds the idea of the two of them trying to save the people on the list one at a time absurd while Ingram tells him that someone's name is on the Irrelevant List and will be erased at midnight and they might be able to save that person. When Finch refuses, telling Ingram he's trying to save Ingram instead, Ingram tells him that the meeting is at the 34th Street Ferry Terminal and Finch should be there to help him tell their side of the story.

The next morning, Ingram waits outside the line at the ferry terminal and is pleased to see Finch across the lines. Ingram greets Finch who smiles back at him. Unknown to Ingram, the government had learned of his plans to expose the Machine, causing Hersh to set up a suicide bomber with his van and explosives in the parking lot close behind Ingram. Moments after Ingram greets Finch, Asif detonates his bomb, mortally wounding Ingram and seriously injuring Finch. That night, Finch awakens in the relief center for the victims of the ferry bombing in time to see Ingram flatline. Despite the paramedics best efforts, Ingram succumbs to his injuries and is declared dead at some point after 11:00pm. Finch witnesses two government agents report on Ingram's passing and realizes the government assassinated Ingram to silence him (“God Mode”).

Although not yet shown, Will Ingram and Alicia Corwin both mention Ingram's funeral(“Legacy”) (“Wolf and Cub”).

A bust of Ingram's head was placed at IFT's lobby, recognizing him as "The Founder" (“Ghosts”).
Shortly after his death, an article was published on the News on 10 website (“Legacy”).

While under the influence of ecstasy, Finch appeared to believe that his accomplice, John Reese, was in fact Ingram. When wishing him goodnight, Finch referred to Reese as "Nathan" (“Identity Crisis”).

After Finch is kidnapped by Root to find the Machine, Reese is directed by the Machine in God Mode to a wall safe where Finch keeps the pictures from Ingram's board. Also in the safe, Reese and Shaw find a map and realize Ingram had been attempting to track the Machine. Before his death, Ingram had narrowed it down to three possibilities, one of which was the Hanford Nuclear Reservation in Washington State. After finding a ticket stub for Portland, Oregon in Lawrence Szilard's briefcase, the two realize the Machine's location was at Hanford as Portland was the closest airport. Later, while meeting with Special Counsel in the room that once housed the Machine, Finch rejects Special Counsel's offer to help find or rebuild the Machine, reminding Special Counsel that he'd worked with Ingram and then murdered him (“God Mode”).

Ingram has appeared only in flashbacks and simulations.