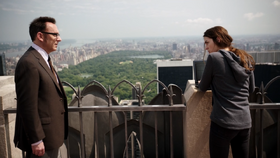 "Nautilus" is the second episode of season 4, and the 70th produced hour of Person of Interest. It was broadcast on September 30, 2014.

Although Finch insists that he no longer wishes to help with new numbers, his interest is piqued when Reese learns that the newest POI is a brilliant college student engaged in a mysterious, life-and-death scavenger hunt.

A nautilus is a type of marine mollusk part of the Nautilidae family of cephalopods, animals with a prominent head and a set of arms or tentacles. A chambered nautilus shell is used to guide players through the game orchestrated by Samaritan.

The New Base of Operations

The team's new base of operations is an abandoned subway repair siding on the Interborough Rapid Transit (IRT), now part of the New York Subway system. Finch is led to the location, which is free of Samaritan's surveillance, by the Machine, which sends messages via spelling errors in Harold Whistler's doctoral dissertation. After outfitting the site with a combination of equipment brought from above ground and materials found in the siding, Finch brings Reese down to see their new headquarters, where they are soon joined by Shaw.