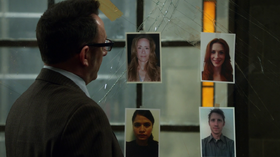 "Number Crunch" is the tenth episode in season 1, and the tenth produced hour of Person of Interest. It originally aired on December 15, 2011.

As Detective Carter deals with the fallout from her recent encounter with Reese and Finch, The Machine ups the ante for the duo by giving them four Social Security numbers instead of one.

The BQE to the right

That being said, the actual roadway is Joralemon Street (the Borough of Brooklyn). More specifically the part of the roadway which bends to run alongside the water's edge of New York Harbor. Furthermore, it is bounded by Atlantic Avenue to the South and Furman Street (with the Brooklyn-Queens Expressway, or BQE for short, very nearby) to the East.

After Detective Carter determines that Detective Foster does not exist, she is trailed by two CIA Field Officers, Snow and Evans, as she is walking along Flatbush Avenue from Fulton Street to Livingston Street in Brooklyn.