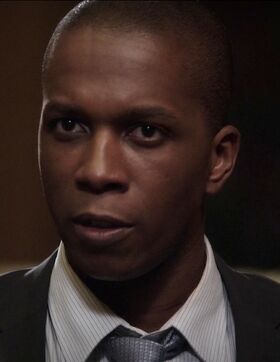 Peter Brandt, better known by his alias Peter Collier, is one of the leaders of Vigilance, an organization devoted to restoring personal privacy to the average citizen while at the same time punishing those who take personal privacy for granted. He claims that his organization has thousands of members.To the world, he is considered as a terrorist who was planning the courthouse's explosion which killed many police officers but he was manipulated by John Greer, the real mastermind behind the explosion attempt.

Little is known about Peter's early life, other than the fact that he wanted to be a prosecutor and was in law school thanks to his brother, Jesse Brandt. Jesse is divorced with partial custody of his son, Frankie, and used to be an alcoholic until he started attending to AA meetings and stopped drinking two years earlier.

On February 9, 2010, Peter visits Jesse and Frankie and comments on how Jesse's life is better since he spends time with his son and stopped drinking. Suddenly, two FBI agents appear at the door with a warrant for Jesse's arrest. Peter asks for the charges that are being pressed but the agents refuse to answer, telling him that it's a National Security exception.

On March 10, 2010, Peter visits AUSA Langdon at the US Attorney's Office in Michigan to ask why are they taking so long and complain about the fact that the process is wrong: his brother is not being charged with anything but is also not allowed to speak with a lawyer. Peter insists in telling that they have arrested the wrong person. The attorney shows him several pictures of Jesse taken from surveillance footage that shows him with Aziz Al-Ibrahim, whose cousin was part of a terrorist group that attempted to blow an American embassy in Egypt. Peter finds it hard to believe, but the attorney just says that "surveillance doesn't lie".

Some time later, Jesse has passed away, supposedly committing suicide. In a memorial for him, Peter talks with Jesse's ex-wife, who comments on how the arrest affected him. Al-Ibrahim appears and approaches Peter to say that he's sorry for his loss. He reveals that they were friends and Jesse was his sponsor at AA meetings, something that saved his life. Al-Ibrahim gives his AA stamp to an emotional Peter, telling him that despite his death, Jesse saved someone else.

During a new visit to the US Attorney's Office (who is now a woman who replaced the previous AUSA) Peter informs them that Al-Ibrahim was just a friend from AA and Jesse was not a terrorist. Peter shouts at the woman, saying that being locked up destroyed his brother and they took away all his hope.

While leaving the office, Peter receives text messages from an unknown sender claiming to know the answers to his questions and asking if he wants to know the truth about what happened to Jesse. (“A House Divided”)

He is picked up by a group of men and taken away to a warehouse where the person who contacted Peter sends him text messages saying that they want him to lead the fight against the government that drove Jesse to his death. He is inducted into Vigilance and given the name Peter Collier.(“Deus Ex Machina”)

Collier spent four months working undercover at Riverton, a large retail company, as VP of customer analytics in order to get close enough to Wayne Kruger, the CEO of Lifetrace, a company that profits off of others' personal information, to witness and participate in the dismantling of his life. Vigilance anonymously gave out envelopes to people victimized by Lifetrace, instructing them on how to get their revenge on Kruger.

Collier attends a meeting with Riverton executives Neal Jenkins and Aubrey Hayes. While he is explaining the research he had conducted into Lifetrace's business, Kruger interrupts him when he gives Hayes a personal gift. After Kruger explains that his firm is using personal information of internet users without their knowledge or permission, Collier questions Kruger about violating personal privacy. Jenkins and Hayes are impressed by Kruger's presentation and recommend to their board that they proceed with the deal.

At a subsequent meeting, Collier and the other Riverton executives learn that Kruger had an unsavory past. Collier is the only Riverton executive who will speak with him and Kruger tries to contact him several times to revive the deal.

Collier lures Kruger to the Mayfield Hotel on the pretense of a business meeting. Collier explains to Kruger that he was unable to proceed with the deal and a frustrated Kruger pulls out a gun. Kruger and his primary assailant, Stu Sommers, wrestle for the gun and Collier runs away.

Reese arrives, and talks Sommers into not shooting Kruger before disarming him. Suddenly, Collier reenters and shoots Reese in the back and Kruger in the left chest in front of a shocked Sommers. Collier calmly explains to Sommers that he had been involved in helping him exact his revenge on Kruger, and tells him he should leave.

Collier then stands over Kruger, and after giving him a firm speech about the importance of personal privacy, he shoots Kruger dead and walks away. Because of Reese's gunshot injury and their need to avoid detection, Shaw and Reese are unable to pursue Collier. (“Nothing to Hide”)

Collier later returns after he and his men are pursuing Jason Greenfield, a former Vigilance member who deserted them and went into federal custody after his shock at Kruger's death. Jason's foster brother, Timothy Sloan, becomes a person of interest after Collier begins hunting him for answers on Jason's whereabouts. Reese and Finch are able to rescue Sloan while Root, under instructions from The Machine, saves Jason and sends him out of the country for his safety. Collier, meanwhile, escapes after injuring Sloan in a shootout. (“Mors Praematura”)

Collier and Vigilance later pursue Arthur Claypool, a former NSA worker. Shaw is able to take out Collier's forces, and escapes with Claypool after engaging in a brief gunfight with Collier. (“Lethe”)

Collier and his men are seen again taking over the bank that holds the drives for Samaritan. Collier attempts to enter the vault by shooting the bank manager in the leg, but fails to gain entry. When Hersh and his team of ISA operatives posing as FBI agents arrive, Collier and Hersh exchange words over the significance of Samaritan and that the government must be punished for spying on Americans. Collier is able to capture Finch, Shaw and Arthur Claypool and orders his men to kill Finch and Shaw while they take Arthur prisoner. Before the Vigilance operatives can kill the two, Reese and Fusco, disguised as members of Hersh's SWAT team open fire, killing two Vigilance members. Collier and his remaining men quickly retreat. (“Aletheia”)

Having intercepted a communication revealing that janitor Cyrus Wells is important to a Decima Technologies operation to rebuild Samaritan, Collier leads Vigilance in an effort to capture Cyrus. Root is able to escape with Cyrus while Reese takes out the operatives invading his apartment and Shaw captures a Vigilance sniper posted in a warehouse. One of Collier's men kills the sniper before he can say anything to Shaw and Collier offers Shaw a deal: tell him everything she knows about Samaritan and her life will be spared in exchange for her joining Vigilance. Though Collier seals the warehouse doors, Shaw is nearly able to make it out before he captures her. Collier states his suspicions that Shaw is a burned government operative that wants revenge and offers it to her as part of Vigilance. While Shaw admits he's right, she also recognizes Vigilance as terrorists and uses a metal pole to take out Collier's men. As Shaw fights his men, Collier flees the scene. (“Root Path (/)”)

Collier breaks into an FBI evidence locker to find the contents of a safe belonging to deceased government worker Leona Wainwright. He finds Finch reading some documents detailing the government's Northern Lights program, and takes them from Finch at gunpoint. He explains to Finch how the fact that Finch is able to stop crimes before they happen confirms his suspicions that the government is building a machine to spy on the world. He inspects the papers and is disgusted by how the government is authorizing drone assassinations and heavy surveillance. He tells Finch they should discuss more privately, but Root opens fire on him and his men. He manages to escape.

Collier disappears and is unable to be tracked in any way; now in possession of the documents, Vigilance exposes the Northern Lights program to the public. (“Most Likely To...”)

Collier tracks down and kidnap Control, Ross Garrison, Greer and Finch, subjecting them to a trial for crimes against the people of America, to be broadcast all over the world. (“A House Divided”)

Collier kills U.S. Intelligence Adviser Manuel Rivera during the kangaroo court session (with Rivera, Sen. Ross Garrison, Control, Greer and Finch as defendants) and after a lengthy discourse orders the execution of all the defendants. However Lambert and his team breach the proceedings and after a brief shootout wounds Collier. Greer then discloses that Vigilance was his creation from the day one, and that it was he who personally recruited Peter Brandt giving him his alias. Furthermore he reveals that the equipment used to broadcast the trial is owned by Decima Technologies and that the world didn't see any of it. The remaining Vigilance members and all other witnesses are killed in an explosion at the courthouse and Vigilance is blamed for it. Lambert then executes Collier on Greer's orders. (“Deus Ex Machina”)