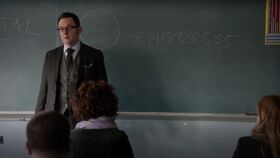 Pi is a mathematical constant, the ratio of the circumference of a circle to its radius. Its value is rounded to 3.14159 and represented by the Greek letter π.

Its decimal value is infinite, having been calculated to over a million decimal places with no regular repeating pattern.

Pi in the Person of Interest Universe

Retrieved from "https://personofinterest.fandom.com/wiki/Pi?oldid=80292"
Community content is available under CC-BY-SA unless otherwise noted.