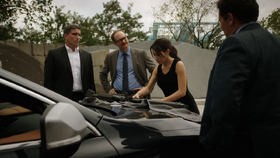 "Pretenders" is the sixth episode of season 4 and the 74th produced hour of Person of Interest. It originally aired on October 28, 2014.

Reese, Shaw and Fusco must protect an unassuming office worker who stumbles into a dangerous conspiracy while moonlighting as fake detective. Meanwhile, Finch travels to Hong Kong as part of his academic cover identity.

This title, as is often the case, has two meanings. The obvious reference is to who so many of the characters involve pretend to be: Reese and Walter pretend to be cops, Finch, a professor and Scarface an FBI agent. But there is a second, deeper meaning, referring to the relationship between Elias, the leader of New York's underworld, and Dominic, the aspirant, or pretender, to his role.