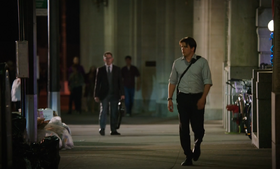 "Prophets" is the fifth episode of season 4, and the 73rd produced hour of Person of Interest. It originally aired on October 21, 2014.

Finch is suspicious when a gifted political pollster’s number comes up at the same time that his typically ironclad predictions go wrong, and believes that the two events are linked. Meanwhile, Reese is sidelined by a direct order from Captain Moreno.

A prophet is a person who is believed to be able to foretell the future with a high level of accuracy. Unlike a psychic, a prophet's predictions are based on their knowledge or the evidence that surrounds them. Although the term is traditionally used in a religious context, it has come to be used broadly, including to describe Simon's ability to predict election results. It also alludes to Finch's inability to accurately predict what the Machine will do in the future. Furthermore, a prophet is commonly known as someone who receives revelation from a higher power, an apt description of both Root and Martine Rousseau.