Person of Interest Wiki
Register
Don't have an account?
Sign In
Advertisement
in: Season 2, Episodes, Season 2 Episodes,
and 2 more 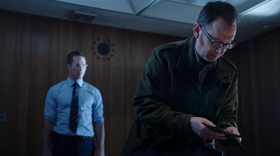 "Proteus" is the 17th episode of Season 2, and the 40th produced hour of Person of Interest. It originally aired on March 7, 2013.

After the Machine gives Reese and Finch six numbers at once, their search for clues leads them to a coastal town where they are forced to ride out a storm with a group of locals in a police station. However, as the weather rages outside, a sinister situation arises inside when they realize there is an unidentified killer hiding among them.

Proteus is a minor Greek sea-god, referred to by Homer as the "Old Man of the Sea". Proteus can see the future and will reveal it to any who catches him, but will also quickly change his shape, making him harder to detect. The title is chosen for several integrated reasons: because of the storm raging on the island, because the Machine can see the future, and because the serial killer changes forms of identity.

The fourth code at 00:35:39
Community content is available under CC-BY-SA unless otherwise noted.
Advertisement