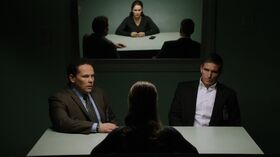 Reese tries to protect a software programmer with a mysterious second life, but it’s unclear which side of her life the threat is coming from. Meanwhile, Claire, a young hacker who Finch tried to protect from Samaritan, reaches out to him for aid.

Q&A refers to Questions and Answers, and is often used to refer to questions asked by viewers or readers of a person or website that answers commonly asked questions. It is also known as a FAQ, or Frequently Asked Questions. The term applies to the questions being answered by Fetch and Retrieve's software, VAL. It can also refer to the question that Claire asked Greer about her risk of death.