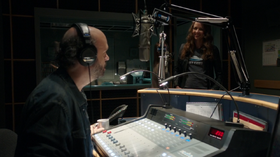 "QSO" is the seventh episode of Season 5, and the 97th produced hour of Person of Interest. It originally aired on May 24, 2016

Root goes undercover at a radio station to protect the host of a conspiracy theory show who stumbles upon information that could get him killed. Also, Samaritan’s agents try to convince a member of the team that their goals are noble.

QSO is an amateur (ham) radio (or "Q") code used when one operator is making initial contact with another operator. The receiving operator typically responds with a greeting and a signal strength report before a longer conversation begins. Q-codes, like the better known ten-codes (10-4) used by citizen's band radio operators, are used to convey information using brief phrases. Once used widely by maritime, law enforcement, rescue, and aviation personnel, their use is now largely confined to military and amateur radio operators.