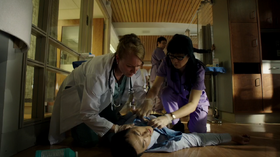 "Reassortment" is the eighth episode of Season 5, and the 98th produced hour of Person of Interest. It originally aired on May 24, 2016.

Reese and Finch become trapped in a hospital that becomes ground zero for a deadly viral outbreak. Also, Samaritan’s newest recruit has second thoughts and Shaw continues to struggle with reality.

Reassortment is when genetic material is swapped between multiple species, especially strains of the influenza virus.