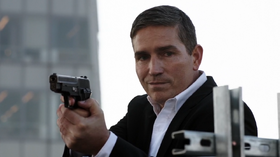 Finch, Reese, Fusco and Shaw embark on one last mission to prevent Samaritan from destroying the Machine and cementing its hold over mankind.

In many programming languages, particularly C-style languages (e.g., C, C++, Rust), the main function may return a single number, to indicate the success or failure of the execution of the program. 0 indicated a successful run, anything else corresponded to some error condition.. In this episode, both Samaritan and the Machine are shut down. The term also metaphorically refers to a happy ending, such as Finch's.

Nolan on how The Machine beat Samaritan: "I think a part of it was all that relentless training, in a sense. Finch and Root trying to scheme out how this would work but also running these simulations with the Machine in order to figure out how it could win in its most pared down form. So you've got this decommissioned Soviet satellite and these things were up in there in their most compact fighting form. Sort of like how armies used to march out and select one champion to represent them, and the fight would be decided with that champion and the rest of the army would abide by that outcome. But at this point, the armies have been decimated and destroyed and only the champions remain. The sparest algorithmic versions of these ASIs uploaded into the satellite like two strands of DNA having a kung fu battle. So kind of fun, but also kind of hard to visualize. Both of them have been reduced to their respective essence, and in that form, the Machine was going to kick Samaritan's ass."[1]

Gizmodo wrote: "Person of Interest was one of the smartest shows on television, turning a fairly pedestrian format into a kind of modern cyberpunk. It asked nuanced questions and tried to give nuanced answers (that’s how Root went from being an antagonist to an ally. She wasn’t always right, but Finch wasn’t always right, either). And that was what the show did: find the line in the murky world of surveillance technology and artificial intelligence." [2]