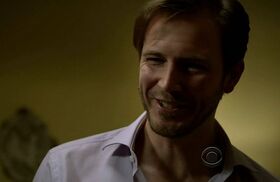 He lived in the same apartment complex as Lily and had set up cameras in her apartment so that he could spy on her. He later broke into her apartment and threatened to kill her. Ernie Trask tried to stop him because he knew Lily didn't love him, but Morris stabbed him in the arm. However, Reese, even in his weakened state, fought Morris off and threw him out of the window. He survived the fall, suffering multiple fractures and internal bleeding. He was taken to the hospital, but it is unknown if he survived.

Retrieved from "https://personofinterest.fandom.com/wiki/Rick_Morris?oldid=81074"
Community content is available under CC-BY-SA unless otherwise noted.