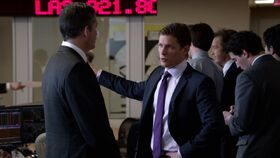 The Machine leads Reese and Finch to Wall Street when a sharp young trader at a major investment bank becomes embroiled in a multi-million dollar financial scam.

Risk is an investment term.

Retrieved from "https://personofinterest.fandom.com/wiki/Risk?oldid=81271"
Community content is available under CC-BY-SA unless otherwise noted.