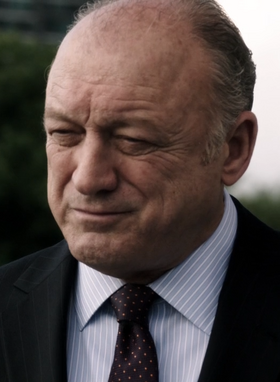 Garrison is first seen talking with Control in her office about the death of Leona Wainwright, and Control tells him that Vigilance is behind it. She tells him to leave the "heavy lifting" work to her.

When Peter Collier exposes Northern Lights to the public, Garrison is horded by frantic reporters asking if the Machine exists, and Garrison continuously denies it. He goes to Control and tells her they have a problem, and advises that she terminate the Program. Control says that the country will be unprotected, but Garrison claims only the Machine won't be there to protect it. He warns her that she is also in danger and leaves. Control finally decides to shut down the Program. (“Most Likely To...”)

Garrison talks with Greer again about authorizing 24-hour access to the NSA feeds for New York City to test-run Samaritan, but Garrison remains doubtful. Greer points out that to get past an obstacle one must move it when Garrison's phone rings and McCourt is at the other end, reassuring Garrison that Samaritan can be activated. Garrison confirms his decision to Greer. (“Death Benefit”)

Garrison visits Greer to check Samaritan beta test sequence and complains about it being 'not so professional', but Greer ensures him that Samaritan's running as smooth as a Swiss watch. Garrison again complains it's already 4 hours Samaritan got all domain awareness feeds of New York, how long will it take. Virgil comes in and shows all probable terrorists, pinpointed, categorized, and tracked with an up-to-the-second GPS. He was ensured they will have a hard target soon and he will be first to know.

Later he watches a terrorist being apprehended as a result of Samaritan's 24-hour test run. Garrison tells Greer that he will verify the findings and if everything pans out he will get in touch soon. (“Beta”)

Greer meets with Garrison to regain access to government surveillance feeds. The terms of the government's use of Samaritan are discussed in detail. Garrison is among five Numbers the Machine gives to Root and Reese. Garrison enlists the help of Control to lobby for Samaritan with Manuel Rivera, a presidential aide. The three, along with the head of the NSA, meet to discuss the merits of implementing Samaritan. (“A House Divided”)

Vigilance places Garrison, along with Rivera, Control, Greer and Finch, on trial for trumped up charges of crimes against the state. During the trial Garrison states that he was only informed about Northern Lights after it was operational. When the trial location (an abandoned post office) is discovered, Vigilance attempts to move to an alternate location. A gun fight between Vigilance and Decima Technologies ensues, in which Decima prevails. Greer offers to escort Garrison and Control back to Washington D.C. Greer orchestrates blowing up the trial location, to blame on Vigilance. Greer uses this act to convince Garrison to reinstate the government feeds for Samaritan's use. Garrison agrees. (“Deus Ex Machina”)

With Samaritan fully operational, Garrison applauds its success at "pre-empt[ing] multiple threats to national security", during a morning meeting with Greer. However Garrison questions who is accountable for Samaritan now that Decima Technologies apparently no longer exists. After their meeting, Greer contemplates eliminating Garrison, with Samaritan responding "not yet". (“Panopticon”)

Following a conflict between Control and Travers, one of Samaritan’s representatives, regarding Samaritan’s intel about a terrorist attack, Greer calls Garrison and reminds him of their previous arrangement which prompts Garrison to force Control to back down. (“Control-Alt-Delete”)

Control confronts Garrison regarding Greer and tells him that he is planning a terrorist attack in Washington DC to put them completely under Samaritan's thumb. She also says that the Machine never lies and she wants to restore its power. Garrison dismisses her ideas, however, because he believes that Samaritan being the best surveillance system and the Machine hides itself to nowhere; he tells her to get a grip or he will find someone else for her job. Control uses this opportunity to clone Garrison's phone to try and track Greer. (“YHWH”)

In a simulation made by the Machine of a world where it never existed, Garrison talks to John Greer about Samaritan extending beyond its original parameters but is powerless to stop it. Greer later orders Root to kill him. (“.exe”)

After Samaritan is destroyed by the ICE-9 virus which causes devastation to global infrastructure, Garrison reports to a committee that the Chinese were responsible. The committee knows it was really Garrison's Northern Lights project, but Garrison tells them it doesn't matter as Northern Lights is now defunct and its personnel assigned elsewhere. (“return 0”)