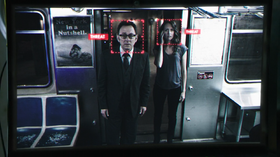 "SNAFU" is the second episode of Season 5 and the 92nd produced hour of Person of Interest. It originally aired on May 9, 2016.

The Machine experiences a glitch during rebooting, supplying Reese and Fusco with the numbers of dozens of people not actually involved in crimes, while also locking Finch and Root out after identifying them as threats based on past violent behavior.

SNAFU is the acronym for the military expression "Situation Normal: All Fucked Up." The expression was coined by U.S. Army troops during World War II. Over time, it has come to mean a situation that is screwed up, but fixable.