Person of Interest Wiki
Register
Don't have an account?
Sign In
Advertisement
in: Characters, Male Characters, Recurring Characters,
and 7 more

View source
watch 01:36
We're Getting Mutants in the MCU - The Loop
Do you like this video?
Play Sound
Scarface 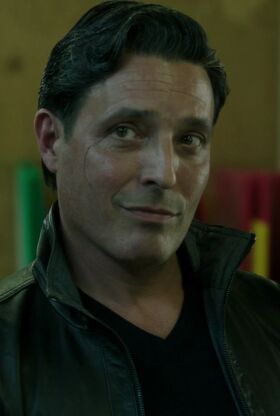 Anthony S. Marconi, generally known as Scarface, is Carl Elias's lieutenant and right-hand man. He is responsible for carrying out Elias's orders, acting on his behalf and speaking for him. At times, he served as Elias's eyes and ears in the field, particularly while Elias was in jail.

As a child, Anthony Marconi lived in a boys' home after a stay in juvenile detention after killing his abusive father by slitting his throat. It was then he got his scar. He soon became friends with two other boys in the same home: Carl Elias and Bruce Moran. (“The Devil You Know”)

Scarface first attracts Finch and Reese's attention as an unnamed police officer supporting the search for a high school teacher named Charlie Burton, who is being pursued by Russian mob figures. As Reese attempts to rescue Burton, Scarface's activities catch Finch's eye, and he becomes suspicious that Scarface is the violent, mysterious Elias, whom they are attempting to find.

At first, it appears that Scarface is simply a member of the NYPD. His involvement with Elias becomes clear as Elias makes his own identity known. On Elias's orders, Scarface kills Russian mob leader Ivan Yogorov and joins Elias as he announces his plans to reunite the Five Families. (“Witness”) The two soon disappear, their future plans unknown.

In 2012, Elias becomes involved in stock manipulations designed to fund his growing mob empire. Scarface resurfaces, again in the guise of a police officer, charged with cleaning up loose ends when the manipulations fail. He picks up a corrupt SEC investigator, Doug Rasmussen, who is later found dead, before dropping a burner phone in a trash can for Reese and Carter to find. When Reese places a call from the phone, Elias answers, giving him a means to connect with Elias, while solidifying Scarface's identity as Elias's lieutenant. (“Risk”)

Scarface soon becomes more visible, and more ruthlessly involved in Elias's activities. He is present when Reese meets with Elias to gather information on a kidnapper who had taken a baby. Elias agrees to help, and Scarface escorts Reese to the location where the baby is to be sent to Eastern Europe, allowing Reese to recover her, at a cost.

With the baby safe, Scarface ambushes Reese and takes him to Elias, who wants to use the baby as leverage to learn what Reese knows about the location of Gianni Moretti, his illegitimate father. Having learned Moretti's location, Scarface shoots Moretti's police guard Bill Szymanski and takes Moretti captive. (“Baby Blue”)

As Elias's position becomes stronger, Scarface becomes bolder and more violent. He is responsible for a car bomb that kills one of the five New York crime dons in plain view of Reese. When the remaining Dons are taken into protective custody by Detectives Carter and Fusco, Scarface kidnaps Carter's son Taylor on Elias's orders. Reese eventually rescues Moretti and Taylor, but Scarface successfully eludes capture. Elias is not so lucky, and is arrested. Despite his employer now being imprisoned, Scarface continues his duties and plants a car bomb, killing both Moretti and his legitimate son, Gianni Moretti, Jr.. (“Flesh and Blood”)

Following the arrest of much of HR's upper management, Simmons and Fusco meet with Scarface to negotiate Elias's assistance with the rebuilding of HR, offering the whereabouts of Luciano Grifoni, the last of the original dons who survived Elias's attempt to kill the heads of the Five Families. The offer is a double-cross, with Elias and Scarface sending a simple message to HR: “Go to hell.” (“C.O.D.”)

Over the subsequent few months, Scarface lies low as HR rebuilds itself and creates a new alliance with Peter Yogorov. Having done so, they set out to kill Elias and Scarface. HR arranges for Elias to be transferred from Rikers Island to another prison. In actuality, Elias is taken to a remote location to be executed as part of a major assault on his organization, but is rescued by Carter. It is likely, but unconfirmed, that Scarface is the Elias lieutenant who was gunned down and hospitalized that same night. (“God Mode”)

Carter keeps Elias and Scarface safe in a secure basement location, earning Scarface's gratitude. Although Elias must remain out of sight, Scarface is free to move around the city. Elias orders his men, including Scarface to leave the room while he talks to Carter. Scarface stands and appears to be about to threaten Carter but instead thanks for saving Elias. A surprised Elias notes that Carter has made a friend out of Scarface.

Following a violent shootout involving Reese and Shaw at a pawn shop, Scarface steps out of the shadows and collects a small fortune in uncut diamonds and $1.2 million in cash from the store. (“Liberty”)

Elias and Scarface continue to work with Carter, helping her to set her plan to pit Peter Yogorov against HR in motion. (“Endgame”) After Carter is shot and killed by Simmons, Elias pays him a visit in the hospital. Elias and Simmons share a brief exchange and Elias tells him that he is there to finish his debt to Carter. Scarface steps out of the shadows and garrotes Simmons to death. (“The Devil's Share”)

Over time, the two establish themselves underground. Reese hires Scarface to help him rescue a number's son from The Brotherhood drug dealers. Since Reese, now a detective, can no longer "break the rules", Scarface acts for him, using a garbage truck to ram an SUV leaving The Brotherhood's hideout, causing a commotion which attracts the attention of the hideout's external security forces by making it seem like a gang dispute, so Reese can inspect the hideout. (“Panopticon”)

Reese crosses paths with Elias and Scarface again while protecting another number, Walter Dang, who becomes the target of The Brotherhood. While rescuing Walter from The Armorer, Reese and Fusco are assisted by Scarface who uses The Brotherhood's high-powered sniper rifle against them and takes out a number of their soldiers and the Armorer himself. He is present alongside Elias when he finally meets Dominic face-to-face. (“Pretenders”)

When Dominic, in order to takeover the gangs of the city, targets Elias, Scarface along with Reese protects him from The Brotherhood soldiers. During a firefight Scarface sacrifices himself to prevent The Brotherhood from further pursuing Elias. They torture him for information on Elias's vault but he does not break. He tells Link that he is prepared to die for Elias and wonders if Link would do the same for Dominic when the time comes.

Elias surrenders himself to Dominic in order to save his friend's life, but during a phone call Scarface tells him that The Brotherhood have no intention of letting him go and implores Elias to give them the "code" to the vault. A tearful Elias says his goodbye and agrees. Still loyal to Elias, Scarface is killed by an explosion when Link's man opens the vault in Bruce Moran's office and the fail-safe Elias had installed activates. His final words were "morior invictus" which is translated from Latin to mean "I die unconquered".

Elias later meets Moran and promises to avenge Scarface's death by taking out Dominic and The Brotherhood. (“The Devil You Know”)

This Elias does when he constructs a false financial trail leading to Link Cordell, who is gunned down by Dominic as a traitor. Elias is then able to parrot back at Dominic the younger man's earlier question, about how it feels to be responsible for his friend's death. (“Asylum”)