View source
watch 01:36
We're Getting Mutants in the MCU - The Loop
Do you like this video?
Play Sound
Search and Destroy 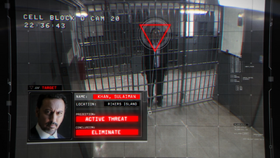 "Search and Destroy" is the 19th episode of season 4, and the 87th produced hour of Person of Interest. It originally aired on April 7, 2015.

Reese and Finch scramble to protect a software CEO when his behavior becomes increasingly erratic following a hacker attack that reveals all his secrets and unravels his life.

"Search and destroy" is a modern military tactic where small units of troops are dispatched to search for enemy troops and destroy them. This applies to Samaritan's pursuit of Khan, as well as its search for the Machine.