View source
watch 01:36
We're Getting Mutants in the MCU - The Loop
Do you like this video?
Play Sound
Shadow Box 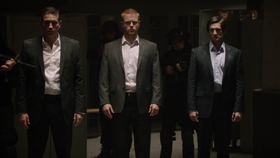 "Shadow Box" is the tenth episode of season 2, and the 33rd produced hour of Person of Interest. It originally aired on December 13, 2012.

While the FBI refocuses their efforts to catch "The Man in the Suit," Reese's latest POI becomes a personal quest after he learns that she's the sister of a soldier who was killed in action.

A shadow box is a shallow rectangular box with a transparent front used to protect and display small items such as memorabilia or recognitions. It is commonly used in military communities to display military medals and insignia or the flags given at funerals to the next of kin of service members. When searching Abby's apartment, Reese finds such a box in her closet.

To shadow box, or shadowbox, refers to throwing punches at an imaginary opponent, such as is done by boxers or martial artists during training. In psychological terms, shadow boxing is overcoming negative self-image in order to experience success.