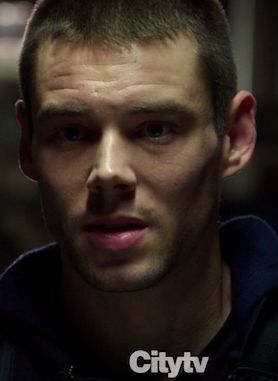 Shayn Coleman is a former US Marine bomb disposal expert who lost his left arm disarming an IED in Afghanistan. After returning home, he lost his house and his fiancée as a result of the predatory lending scheme run through Philip Chapple's charity. Shayn was equipped with a state-of-the-art prosthetic arm, which allowed Reese to identify him from a video as former military.

Shayn met Abby Monroe and together they came up with a daring plan to put an end to Chapple's scam which had drawn in several of Shayn's military friends, leading one of them to commit suicide. In the effort, Shayn stole a motorbike which was used in the robbery of 20 pounds of plastic explosives and blasting caps from a New Jersey construction site. Due to the possibility of terrorism, Carter issued an APB for Shayn and Abbey.

Finch was later confronted by Shayn just as he was breaking into the charity's safe. Shayne removed two keys and a code from the safe while Finch copied Chapple's hard drive. When Finch asked Shayn not to shoot one of Chapple's men, he complied. Finch escaped the scene on the back of Shayn's stolen motorbike, but Shayn later held a gun to his head in an effort to get answers. Reese was able to negotiate to trade Abbey to Shayn in order to get Finch back safely. Finch managed to hack into Shayn's prosthetic arm to allow he and Reese to track him.

Finch and Reese concluded that Abby and Shayn planned to use the stolen explosives to break into Chapple's safety deposit box located inside the vault of the investment bank Merton Watts. Reese is able to catch the two in the act and effortlessly disarm Shayn. After the two explain why they intend to rob the bank and their lack of legal options, Reese aids them in blowing a hole in the vault floor, sympathetic to their plight as a fellow veteran. Shayn and Abby locate Chapple's bank statements for a Venezualan bank that reveals he stole over $30 million dollars from veterans. However, they come under attack by three of Chapple's men and Shayn's prosthetic arm is slightly damaged. Shayn and Reese held the men off before Shayn and Abby dressed in banker's clothes and escaped into the bank lobby.

In the lobby, Shayn and Abby meet with Finch who provides them with cover identities that allow them to avoid detection by the FBI and police. Having never had a plan for what to do with the information once they got it, Shayn and Abby hand over the bank statements to Finch and asks if he can do something with them. Finch promises to empty out the accounts and donate all of the stolen money to reputable military charities, satisfying the couple as Chapple watched helplessly from nearby. Finch then promised to get Shayn and Abby safely out of the state, which satisfied Shayn as his just wanted to be together with Abby. After Fusco promises to cover their escape, Shayn and Abby worry about what happened to Reese.