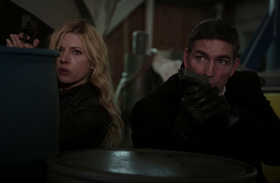 Reese must protect a bounty hunter who refuses to let the potential threat to her life deter her from the relentless pursuit of her target. Also, Finch tries to set the plan he began in Hong Kong in motion.

To "skip" is to leave one's known place of residence in order to avoid responsibility for a debt or criminal act. Similar to bounty hunters, skip tracers are employed by a wider range of entities including debt collectors, repossession agencies, attorneys, private investigators, bail bond agencies, and process servers to locate the individual who skipped.